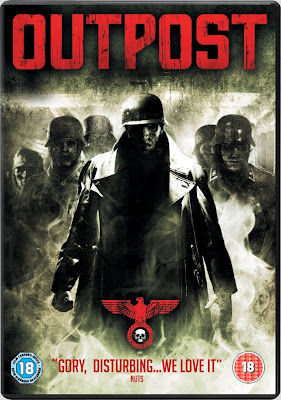 Outpost is an ok film, it just fails to get as creepy as it at first seems it will be.

The plot concerns a man who hires a band of mercenaries to get him to a location of interest in the middle of a war torn country in Eastern Europe. The location turns out to be an old Nazi bunker, seemingly abandoned. Mysterious bright lights, and figures in the woods surrounding the bunker force the mercenaries to take shelter inside. As the film goes on it is revealed what exactly the man who hired the mercenaries is looking for, and also who the mysterious figures are (hint: they are Nazi ghost/zombies).
The film starts off real good, it's mysterious, unsettling in a kind of 'House on Haunted Hill' way (the remake obviously), but after people start getting killed off it goes downhill. Despite bullets being hammered into peoples eyes, and people being knifed, the violence is very mellow, hardly any blood at all, and extreme close ups kinda hide the violence. 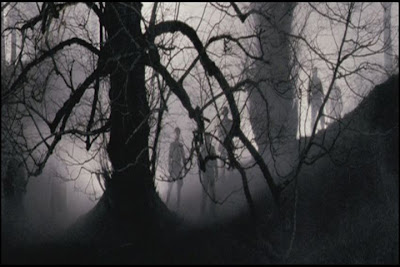 The films plot is intriguing to begin with. It is actually partly based on rough truth (Wiki 'Die Glocke' to see what I mean), but I found reading about that, much more creepy than the actual film. The ending is really lame, in the commentary the director reveals the ending they intended to have for the film couldn't be done due to lack of time and money. There is an alternate ending on the DVD, and I think if that had been part of the film it would have ended much better than the petering out it does do.
An ok film, looks great, good soundtrack, and atmosphere, but runs out of ideas mid way into the film.

Posted by Daniel Simmonds at 15:09