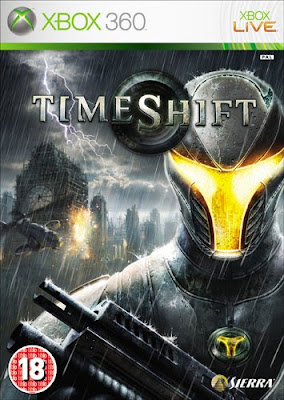 Timeshift is a first person shooter that was released to not much acclaim a year or so back on PS3, and 360 (maybe also PC).  The game attempted to stand out from the identikit crowd by the usage of Blinx style powers that lets you mess around with time.

The story is really bare bones, and never explained in too much detail.  It is quite cool though, well I think so.  The game starts at a laboratory in modern day.  A Scientist has stolen a high tech suit.  He sets off the Labs self destruct sequence before vanishing into thin air.  Another Scientist quickly gets into a similar suit, and too vanishes into thin air just as the lab complex explodes wiping out everyone left inside.  You play as the 2nd Scientist.  It turns out that both the suits are able to time travel.  Scientist 2 travels back in time to try in pursuit of the thief.  He arrives in 1947 to find a vastly different world.  The thief; Dr Krone has altered the time line so that he now rules America.  He has used his knowledge of technology to turn the world into a steam punk nightmare.  Giant robots stalk the streets, while his army are armed with plasma, and Tesla guns.  He broadcasts his rule over giant TV screens set up all over the war torn City you find yourself in.  Joining up with the Resistance you must hunt down and stop Dr Krone, if for no other reason than his suit is the only one of the 2 capable of returning to present day. 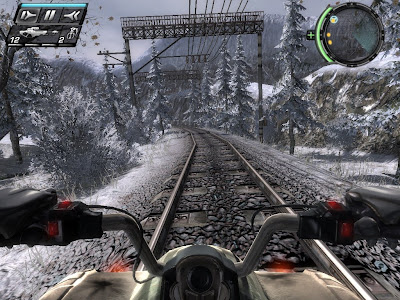 The game gets off to a bad start.  The rain effects are fantastic, but for the first few levels the locations are really bland.  Destroyed streets, and rubble strewn apartments are not too exciting.  Later levels get more interesting though.  Half Life 2 style open driving levels break up the proceedings, while most later levels are based around various well defended bases of Dr Krone.

The game feels very last generation, it is similar in feel to oldies like Project Snowblind, and Pariah.  While the game looks ok, the soundtrack, and sound effects are really generic, and don't stand out in the slightest.  The games difference comes in the form of time powers.  You are able to pause time, rewind time, and slow time down to help you defeat the Soldiers, and progress through levels.  Slowing time down is basically just bullet time, seen a billion times before.  It speeds you up, while slowing enemies movements.  It is used in puzzles as well though, such as retreating from a time bomb, or passing between the spinning blades of a giant fan.  Pausing time lets you snatch weapons out of enemies hands which is amusing.  It is also used for puzzle situations, such as being able to pull two switches at the same time to open a gate, and to walk on water.  The last power you have is to rewind time.  This is the least used of the powers.  In regards to fighting enemies you can use it to return thrown grenades.  In terms of puzzles it can be used to recreate destroyed structures such as bridges, and also to reverse the flow of wind in wind tunnels.  The powers are cool, but it is always quite obvious when you are supposed to use which powers in regards to the puzzles. Your suits A.I always helpfully tells you.

Enemies for the most part are Soldiers of Dr Krones Army.  They use all the games weapons, such as sniper rifles, machine guns etc.  There are special Soldiers as well which turn up.  These include super fast ones (that need to be fought in slow motion), Soldiers who teleport, as well as ones protected with special energy shields.  The really big robots only appear a few times, and show up as bosses. 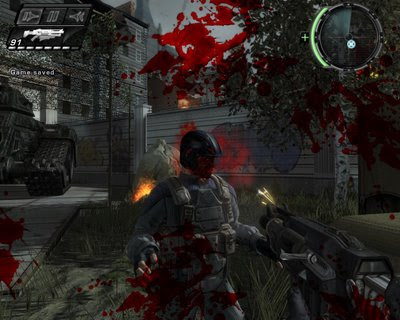 For the most part the game is just straight first person shooting.  A few Half Life 2 style driving sections as mentioned, as well as some sections where you man a gun emplacement, whether it be on a vehicle, or defending a objective.

All the usual guns feature, but some have a futuristic twist to them.  My favourite weapon, and the most over powered one is a Gears of War style crossbow that fires an explosive bolt.  It is too overpowered though, as one hit from this weapon makes any enemy explode into bloody chunks.  Multiplayer deathmatch is included, but I had no incentive to try this, I doubt anyone is playing it anyway.

The game is very old fashioned in feel, and really cannot compete at all with most the FPS games out there.  It is better than was made out in reviews, and if you see it cheap then defiantly pick it up.  It is just nothing special. Be aware the game has quite long load times in places, and can be frustrating at times.

Posted by Daniel Simmonds at 04:08