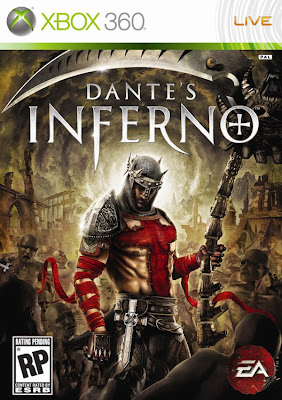 This game from Visceral Games has got quite a few mixed reviews.  Some people argue that it is a shameless carbon copy of God of War.  Some say it is a monstrosity being based of off the classic Poem Dante's Divine Comedies, ruining the subject matter.  Others still say the game is very well made, and very slick, as well as being a Hell of a lot of fun (actually no pun intended, honest!)

The game starts with Dante (the character you play as) returning to his home after being away fighting in the Crusades.  He discovers his father murdered, and his girlfriend Beatrice also slain.  As he laments this tragedy Satan appears.  Satan captures Beatrice's soul and flees with it.  Horrified at this chain of events Dante chases after Satan, who leads Dante to the very gates of Hell.  Dante driven by a need to rescue his beloved Beatrice plunges into Hell, determined to fight the legions of the damned, obsessed with rescuing Beatrice from a fate most terrible, of which he was ultimately responsible for. 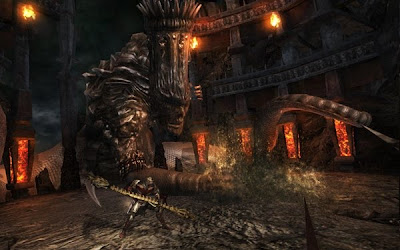 In the Poem Inferno; book 1 of the Divine Comedies, Dante is given a tour of Hell by a spirit called Virgil.  He visits each level of Hell in turn (there being nine circles of Hell) looking upon the horrors of the place.  Obviously this wouldn't transfer well to a game, so instead Dante has been severely beefed up.  The start of the game sees Dante murdered.  The Grim Reaper shows up to claim Dante's soul, but Dante furious at being dead fights Death, ultimately stealing Deaths Scythe and using it to kill him.  The main weapon in the game is Deaths scythe.  It can extend, and has a vast reach.  Dante's other weapon is Beatrice's Crucifix.  The denizens of Hell are very vulnerable to this Holy icon, and really can get messed up by this projectile (Dante is able to fling out ghost images of the Crucifix at enemies).

Dante is dressed in his Crusader uniform.  He has stitched into his own skin a crucifix fabric which details the many sins of his life.  Dante is far from good, in fact the things he has done in his life are down right evil.  He deserves to be in Hell, having committed grave sins such as murder.  He really is not a nice person.  Beatrice on the other hand is a completely innocent soul.  She is being punished for Dante's actions.  She was the one good thing in his life. 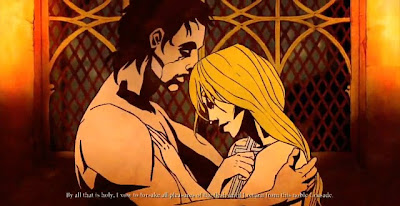 The story is simple, but very well told.  In each circle of Hell there comes a time when a cartoon plays, it zooms in on a particular area of Dante's crucifix mural to show the relevant event in Dante's life where he committed the sin of the circle of Hell he is in.  Throughout the game the smoky form of Satan appears, with a captured Beatrice in tow.  Satan constantly taunts Dante, and brags about what he is going to do to Beatrice.

There being nine levels of Hell means the game is able to be split up easily into levels.  The 9 circles cover Limbo, Lust, Gluttony, Greed, Anger, Heresy, Violence, Fraud, and finally Betrayal.  The levels each represent these sins.  Gluttony takes place in a very fleshy place, giant entrails, and pouring vats of excrement for instance. Meanwhile Lust takes place in a desert, with phallic looking structures, and winds of lust.  The only problem with these locations is apart from a few factors a lot of the levels all look pretty much the same.  Walls of trapped souls can be climbed in each of the levels, there are chambers where you must defeat enemies before preceding, but not a lot else.  The transition between realms is not done too well, it basically involves you climbing down shoots of bodies, there is no fan fare, just a small title that appears to inform you, you are in a different location.  Each level is not too big either which is a real shame.  The game took me about nine hours to complete, which is a decent time, but the urgent pace of the game sees you working your way through the circles by the fastest possible route.  This works in the context of the story, but really feels like you are never in a location long enough to really appreciate it. 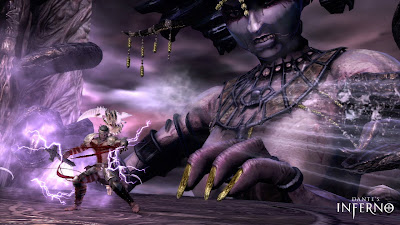 The enemies in the game are quite a highlight, but towards the end start repeating themselves a lot with just palette changes.  Limbo sees you attacked by unbaptised babies with blades for arms, in Lust naked females with phallic projections attack you, letting out orgasmic moans when you hit them. Gluttony sees hideous naked females who grab you in a attempt to consume you, as well as vomit bile at you.  In Greed conjoined adult twins armed with giant maces fight you, each hit on them releasing bundles of golden coins.  Along with these are lost souls, basically cannon fodder, as well as demons who appear in various guises, and can be quite tough.  Bosses are very good for the most part.  Obviously Lucifer is the end of game boss.  Some bosses take on the form of people you once knew (such as your father, and your best friend) while others just look ace such as the gigantic naked Cleopatra (who attacks you via giving birth to babies out of her nipples!), and the unique spin on Cerberus (rather than the traditional three headed dog, is instead a giant jaw that has three very phallic looking tentacles with mouths attached to it).

You gain experience during the game with which you can use to upgrade your stats such as health, as well as improve the powers of your scythe, and crucifix, as well as the four types of rather pointless magic you have access to.  You get experience from killing enemies, as well as by judging famous people from history (such as Attila the Hun, and Pontous Pilate).  You have the option to either damn enemies (earns you unholy experience), or absolve them (nets you holy experience) 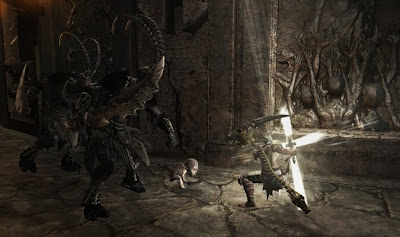 The game looks very good, the budget must have been high as everything is very polished.  But like Silent Hill 5, this is actually detrimental to the game as everything looks so smooth and polished, it really needed grain, and grime. It is strange that the most faithful level of Hell is Fraud, this is because you don't actually see anything, it all takes place above pits where the damned are, with a voice over describing each of the unseen Hells these people are in.  Imagination is the most faithful tool to instill the horror of Hell. The damned souls of Hell are all naked, but have the traditional look of featureless mannequins, so it is hard to feel sorry for their pitiful existence.  The game is quite adult, there is lots of violence, you can tear enemies to pieces, and decapitate, and brutalise, also there is a lot of nudity, including Male nudity, but none of this feels included for shock value, or to titillate which is a good thing.

God of War comparisons are impossible to ignore.  The scythe controls like Kratos's arm chains, there are quick time events used to finish off enemies, and the whole structure is very similar (lots of fighting with platform sections, and simple puzzles).  Kratos even goes to the Greek version of Hell in his games.  My view of this though is that; yeah sure on the PS3 it may be a bit similar, but the 360 does not have a game of this type, so Dante's Inferno fills a nice hole. 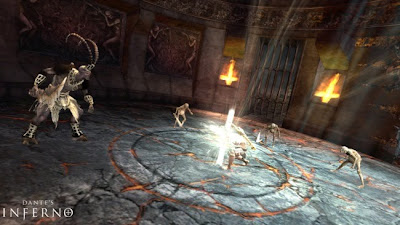 I did enjoy this game, and I have a feeling I would get more enjoyment out of a second play through.  The game is set up for a sequel, I assume there will be both Purgatory, and Heaven in the next two games.  A fun game, a little too polished, but has a cool story, great enemies, and a great soundtrack.

Posted by Daniel Simmonds at 11:06