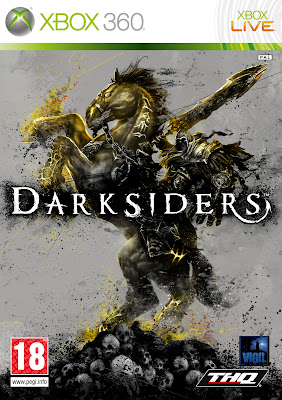 Darksiders is an action adventure game set on post Apocalyptic Earth.  The game drew many comparisons with the Zelda series, and was described by some as 'mature Zelda'.

In Darksiders you play as one of the four horsemen of the Apocalypse; War.  An ancient pact existed between the forces of Heaven and Hell that dictated that they could not go to war with each other until mankind had advanced far enough that they could survive the war.  To enforce this seven magical seals were created.  Only when these seven seals were broken could the war begin.  The game starts with the Apocalypse starting.  Meteors crash down all over the Earth with the forces of Heaven and Hell emerging from the remains.  One such meteor releases War who has heeded the call of the Apocalypse.  During his battle with the forces of good and evil he is slain.  A hundred years later he is resurrected by The Charred Council; beings who keeps balance between good and evil.  The Charred Council reveals that the seven seals had not been broken, and that War has been blamed for starting Armageddon too early, which has resulted in the total extinction of the human race.  War is tasked with heading to Earth in a bid to clear his name and discover who really was responsible for cheating The Charred Council. 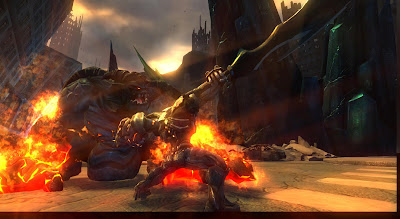 You play as War, a red robed beast of a man armed with a giant sword.  As you progress your weapon gets experience points that level it up to make it more powerful.  You get access to a few additional weapons as well.  Much like Zelda a majority of these weapons are discovered in temples.  You get access to a boomerang (here a shuriken type weapon) that can be used to help solve puzzles as well as fight with, a hookshot that lets you grapple to swing points and enemies as well as a load of other item types such as a scythe, power glove, and even a pistol.  In another nod to Zelda you later get access to Ruin; Wars horse.  The horse controls a lot like Link's horse Epona.

The layout of the game feels very similar to the under rated Soul Reaver games.  The game world is all open ended, no load times at all which is really cool.  There are shops run by a friendly demon.  At these shops you can buy upgrades to your weapons, as well as magic upgrades (you get access to four different types of magic attack, all pretty pointless), and items such as health potions.  Though there are lots of potions I never actually had the need to ever use one.  Also at the shop you are able to warp to different points in the game world, much like the gates in the Soul Reaver games.  A final nod to Soul Reaver can be seen in the ethereal wings that War has, he can use these wings to glide across gaps. 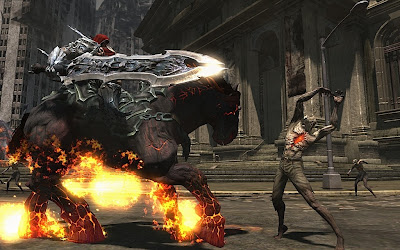 Most the enemies you fight in the game are demons.  These come in all shapes and sizes, from lumbering beasts, to humanoids, to insectoid ones.  Throughout the game there are constantly new enemy types, though there is a lot of palette swaps rather than entirely new ones.  You also get to fight a variety of angels.  These all come in the form of winged humanoids, but are armed with a variety of different weapons.  Bosses are a real highlight of the game, each requires a Zelda style method to kill, requiring the latest weapon or tool you have collected to defeat them.  The Bosses are mostly massive and real fun to fight, such as a teleporting spider Queen, a giant sandworm, and a hulking great car throwing demon among others. The lowest level of monsters include reanimated human corpses; zombies! woop.

The game is very violent, enemies literally ripped to pieces when killed.  They get limbs pulled off, gutted, heads decapitated, and sliced into pieces.  Lots of blood, and extreme fantasy violence.  One highlight involves a scene which sees War teleporting into a giant monsters head, and then ripping it to pieces from the inside.  When enemies are nearly dead they go into a stunned state which sees one tap of the B button to do a bloody automated kill. 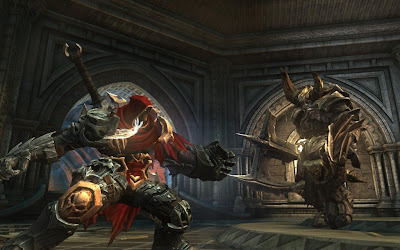 The whole look of the game is very good, the graphics while not outstanding are fantastic.  The game is set on Earth a hundred years after mankind's extinction.  As such there are many real life style locations that feel really unique in an action adventure fantasy game.  One of the dungeons is set in a subway system for instance, while others are set in a cathedral, a housing estate, and a freeway among others.  Bodies of humans are everywhere, as are machines such as cars and trains.  The dungeons themselves are very Zelda like.  A load of puzzles litter the places: block puzzles, water based puzzles, as well as others.  Quite cool with the exception of one dungeon; the Black Tower which is basically one giant puzzle, I was damn glad to be finished with that!

I was impressed with this game, and had quite a lot of plot, with quite a few decent length cut scenes.  Definitely set itself for a sequel with a slight cliffhanger ending, and unresolved plot points.  It took me around 12 hours to complete on normal, a decent length that never got boring despite a fetch quest at the games end that saw you having to go back to all the locations in the game world to gather specific items.  Going back to earlier sections allows you to use new weapons and tools to reach otherwise unreachable chests (that contain experience points (souls) as well as health, and magic upgrades).

A mishmash of Zelda, Soul Reaver, Shadow of the Colossus, and even Portal (!) shows that stealing the best bits of other games rather than coming up with anything new can actually be a good thing.

Posted by Daniel Simmonds at 14:56