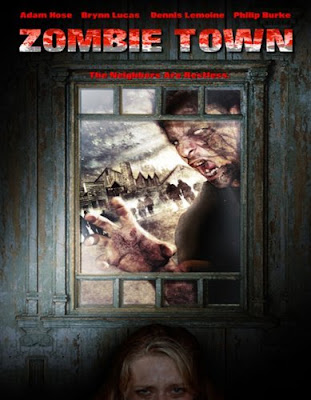 I don't know why but slimy insects and zombies seem to go hand in hand.  First there was Night of the Creeps, then Resident Evil 0, and now this Zombie Town.

It starts off out in the woods when a group of Rednecks are killed when one of their number gets infected by some type of disease.  Soon the virus spreads to the small Town of Otis (population 174). Local mechanic Jake, his ex-girlfriend Alex and Jake's rival Randy discover that the whole Town is under attack by parasitic slugs that get passed on via bites.  Determined to stop the plague the trio set out to stop the infected one zombie at a time. 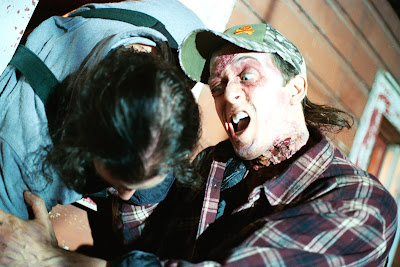 The film has a low budget, and much of this is spent on blood, there is buckets of the stuff.  The acting is mostly very poor, Jake takes all of 15 seconds to get over discovering his close brothers slug infested corpse, while his girlfriend apparently being some super scientist is laughable.  Randy (played by Dennis Lemoine) is fantastic though, with the character providing much of the comedy with his Bruce Campbell one liners such as 'Oh my Lord! it's like a God-damn Grandma massacre in here!' upon discovering the aftermath of Saturday Bingo night.  It's kinda funny that the old people cause the spread of the virus with all of them visiting their relatives while in zombie form.  Randy does seem a bit cold rather than humorous though with all his gleeful killings of people he once knew (such as his old grade school teacher, his boss, and even his Aunt being dispatched merrily by him).

There is not much plot, and the big plan to take out the zombies is not well explained and strange.  No shortage of guns leads to plenty of action, and the zombies themselves while just looking like crazed people get to chomp on plenty of victims, there is even a zombie dog thrown into the mix!  The film is fun though, and is genuinely funny at times though it is never easy to actually care for any of the characters (except Randy as he is darn funny). 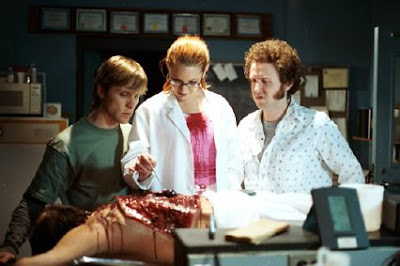 It brings no new ideas to the zombie genre, and feels like a hundred other films, it actually reminded me a lot of Dead and Breakfast, and Chopper Chicks in Zombie Town with its action and humour.  It is actually refreshing that the characters know exactly how many zombies they will have to deal with.

Despite a weak start once the film had settled in to being a care free, light hearted zombie murder-a-thon rather than trying to have any seriousness I did enjoy it.

Posted by Daniel Simmonds at 13:42