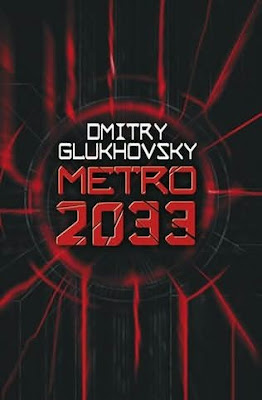 Metro 2033 was originally a Russian book released in 2005, it has been translated into many languages with the English language version being released in 2010 to coincide with the release of the game. Interestingly Glukhovsky preferred a videogame of Metro 2033 over a film adaptation. Anyway, I digress, I am not the best at book reviews, having not done many, I will try my best though.

Metro 2033 takes place around 20 years after nuclear Armageddon has destroyed the surface world. Artyom lives at VDNKh; a station on the edge of the Moscow Metro. Beings known as Dark Ones have begun attacking the station. It is feared that if they over run VDNKh then the whole Metro will be in peril. A Stalker named Hunter gives Artyom a special mission. He is to head to the heart of the Metro to the legendary station Polis and alert them to the dire situation with the Dark Ones. Having never been far from his home station this is a huge undertaking for the young man, and one that will lead him on a path of adventure, horror, and self discovery.

It is hard to write about this book without comparing it to the game. The world of the Metro is a place with not much hope. The game has you fighting many many hundreds of mutants and monsters, the book for at least two thirds is far more calm and at times reads like an essay. The meaning of life, religion, politics all are looked into deeply, sometimes many pages dedicated to Artyoms inner thoughts as he de-constructs the belief system, the sense of nationality and free will. On his travels he comes across many different ideologies; the fourth Reich (Nazi's), the people of the Red Line (Communists), as well as cults (such as the Children of the Worm) and more normal, but no less troubling faiths.

At times Artyoms travel seems less like a story, and more like an excuse to look into these different beliefs. He is railroaded from one set piece to a next, always some miraculous event saving him from the many times he is captured. His character states he does not believe in destiny and that free will persists yet he has changed these thoughts by the books end. One particular fourth wall breaking moment had him wondering if he was just a character in a book, unknowingly following the plot of an author, which of course he is!

The Metro is a place of tales, paranormal activity and surrealness. A lot of the book is dedicated to gossip and stories various characters have, all for the most part are interesting, and often downright creepy such as the story of a Satanic cult which believe they are on the gates of Hell and so kidnap people to dig downwards to open up the way to Hell. Others talk of a secret second Metro line where Angel type beings silently monitor the inhabitants of the world. The Metro is compared to Purgatory, to a dream, to a punishment for all mankind. There are many ghostly encounters through the story; ghost trains, mysterious voices, visions and a really interesting look back on World War II that has the Russian Red Star actually being a pentagram used to summon demons with which to fight the Nazis and their magic.

So much happens throughout the book that it never has time to get boring. It is quite sedate (apart from bursts of random violence) until towards the end when far more action occurs once Artyom gets topside and is hunted by the various mutants of the wasteland. I have gone back to play through the game after reading this book and surprised how much of an action game it actually is when my opinion before hand was that it was more low key.

A well translated book and I will definitely be picking up the sequel (Metro 2034). Be aware this is not a happy book and has a massive, massive downer of an ending, one that even though I already knew what it was (due to the game) left me speechless with it's powerful impact. An essential book to read, a modern classic.

Posted by Daniel Simmonds at 13:18