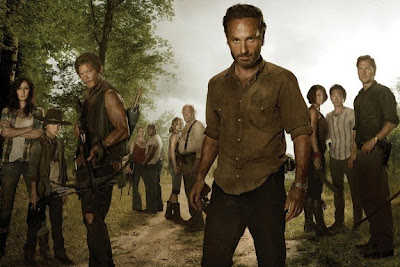 Despite the generic first episode season 1 of The Walking Dead was excellent, season 2 was criticised for being a bit boring in the middle (I don't agree with that statement myself) but again was fantastic, and now season 3. Somehow the show just keeps on getting better! Can't help but be minor spoilers about previous seasons and this season so proceed with caution.

Ex-Sheriff Rick and his band of survivors discover a prison and decide this would be the perfect place to hold up against the continuing zombie apocalypse, Meanwhile Andrea who the group believed dead has spent the long winter with cold as ice sword wielding expert Michone. They discover a Town that appears to be thriving; Woodbury. The leader of the town is a man known as The Governor. On the surface this seems like a slice of heaven in the grim new world but the town may hold a dark sinister side to it. When Ricks group and The Governor's people become aware of each other will it lead to partnership or open warfare? 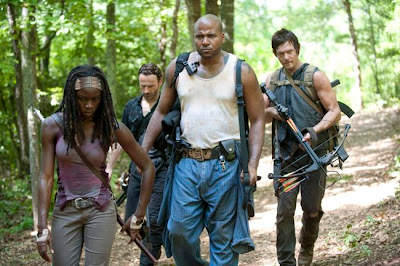 Season 3 constantly upped the ante in terms of exciting plot developments and just fantastic episodes. Previously zombies were by far the main threat for the 'heroes' but here they take a back seat, at best a mild distraction while at worst used as weapons between the battling camps of the prison and Woodbury. Humans are far more of a threat here than ever before. Zombies after all are brain dead creatures who operate on instinct. The Governor and his cronies are twisted, his ideology being that to defeat the monsters you have to become a monster. One conversation that stuck in my mind had one of his men saying to him (to paraphrase) "If your daughter was alive do you think she like what you have become?" to which he replies "no, I think she would be scared of me, but maybe if I had been like this from the start she would still be here now". David Morrissey is stunning as the Governor, he gives a really powerful performance, he has real screen presence. Despite pretty much being evil the Walking Dead does what it seems to excel in doing; giving 'bad' characters sympathetic sides so that they are not just pantomime one dimensional beings.

This time around there are 16 episodes with barely a bad episode to be seen. The most interesting episode by far was one which could have taken place at any time in the shows time line (Clear). The episode was a completely self contained story totally removed from anything going on in the over arching plot. The show needs more of these, not only was it a beautiful, tragic tale but it's singular purpose told a concise story that the other episodes lacked. The main plot for this season can't help but take centre stage, there are so many surprises and moments were I was shouting with glee at the fantastic set pieces I was seeing. 'Arrow on the Doorstep' was my favourite episode, when Rick and the Governor finally meet, the two sides shown to be pretty much identical, each member with their own counter-part on the opposing side, it gave humanity to the 'bad' guys. 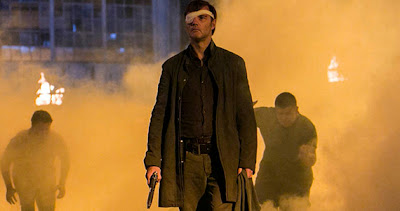 The zombies are dealt with as brutally as ever, there are some really violent scenes, the zombies as ever look fantastic even if they do take more of a back seat here. The acting is of quite a high standard, due to the size of Woodbury there were bound to be some weaker actors, many don't even get speaking roles but still managed to irritate me just by the way they looked. Plenty of weaker characters who are quite annoying though (Andrea in particular).

So season 3 of The Walking Dead is an all over success, again major characters are killed off showing that no one is safe from death regardless of how ingrained they are into the show. Plot holes crop up now and again, one in particular had a character attempting to pick an object off the floor using their feet for what must have passed for two to three hours in the shows world, ridiculous! I am interested to see where the show goes from here, it has already deviated quite a lot from the comic books (which is a good thing!) and I have now reached a point in the show where in the comics I had stopped reading so it will all be new from now. 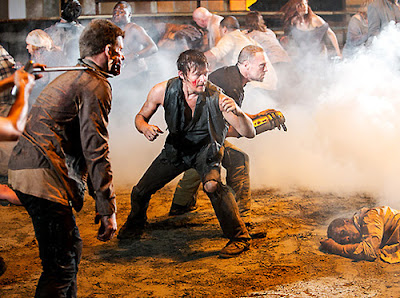 A great season of a great show, cannot wait until season 4 starts later this year (I believe). Any zombie fan must watch this!

Posted by Daniel Simmonds at 09:50