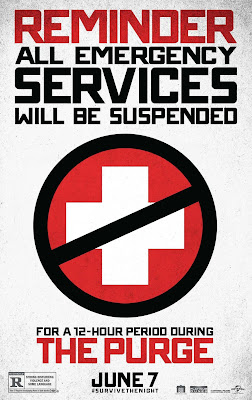 I love the idea behind The Purge, it is something I had kinda come up with independently and great minds do think alike.  There are few films better worth seeing on the big screen than horrors.

In 2022 unemployment, crime and violence are at an all time low, the government known as 'the new founding fathers' have passed a radical act. Once a year for a 12 hour period crime becomes legalised in order for the populace to work off their aggression on each other. James Sandin (Ethan Hawke) is a successful home protection sales man with a loving wife and two children, Him and his wife Mary are firm believers in the purge initiative and expect to face no trouble as the purge starts and they lock down their house in their rich suburban neighbourhood. However their annoying son Charlie takes pity on an injured homeless man begging for help and lets him into the house...only the man has been followed. Now the house is surrounded by a group of masked rich kids who demand the man be given to them or they will break down through the defences and kill everyone inside. With a series of terrible events making James rethink his approval of the purge he decides to stand and fight rather than give the innocent man over.

Ethan Hawke with this and Sinister is fast becoming one of my favourite actors. Here he is again fantastic giving real depth to James whose beliefs are questioned and whose real desire to protect his family at all costs can be seen through his fantastic acting. Special mention must also go to Rhys Wakefield  as the face and voice of the masked strangers, immaculately dressed in a suit and well spoken his barely contained rage and madness is delightful to watch, his creepy as all hell grin is fantastic but never straying from being crazily polite. One point in which he calmly executes an over zealous member of his gang before saying to James (to paraphrase) "Now I just killed him and he was my friend, you, you I don't even know". It is hard such to believe Wakefield came from the Australian soap Home and Away; not really known for its amazing acting. Also on the soap front daughter Zoey is played by Adelaide Kane who was a main character in the other Australian soap Neighbours also not known for great acting but who here does as good a job as possible with the stupid character she is given.

I loved the idea for the film even if it did feel a bit similar to Assault on Precinct 13 with its near identical plot. Before the house is breached the air is thick with tension, I wanted to leave the cinema as the tension was killing me, I couldn't bare the anticipation of the horrors to come. This is milked for all its worth, mostly through montages of the strangers creepy antics shown through the cameras monitoring the outside of the house. Their masks are of smiling people, very sinister. When the breach occurs the action comes thick and fast with the tension sizzling out as the strangers act with a frenzy that leaves them prone to ridiculous mistakes, these are not intelligent people regardless of what the polite stranger says. A later plot twist was an interesting decision, I am on the fence on if it worked or not but I did not expect some of it. 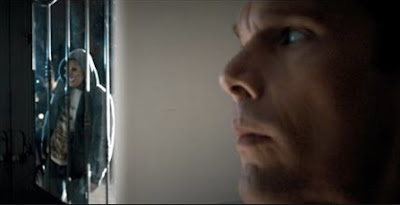 Being a 15 there is not much blood or violence really to speak of which is not that big a deal, what takes away from the film is little annoyances based on my preferences. If I lived in a world that has the purge I would certainly make sure I was suitably protected, I guess it is down to the arrogance of James that he is not despite him knowing the security systems he sells are not 100% fool proof. I would design a security system that would torch anyone coming onto my property, but hey, that's just me! The children Zoey and Charlie are super annoying also, didn't care about those idiots.

The tension of the first 40 minutes is quickly dissipated by the fast action that follows, just too many times a character is about to be killed before they are saved at the last second by someone off screen, at least three or four times this happens, it becomes kinda predictable by the end. Still, I think this is worth seeing.

Posted by Daniel Simmonds at 16:26