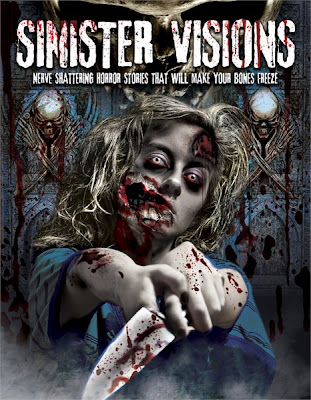 Little did I realise yesterday when I put up the trailer for Sinister Visions that the release day was today! I even mentioned the date in my post but it didn't click at the time. Sinister Visions is a horror anthology that brings together 5 different tales, and a few more fun extras besides.

Succubus is the first story and follows cool intro credits. It starts off well enough with a static screen giving an explanation of what a succubus is. The plot has a girl on an expedition accidentally breaking open a strange device, the gas inside the egg like thing goes into the girl and she becomes possessed by a demon. Back at home the demon side compels her to find men to take. The effects for the demon were great but I was left disappointed as the story just never really went anywhere or had any type of resolution. 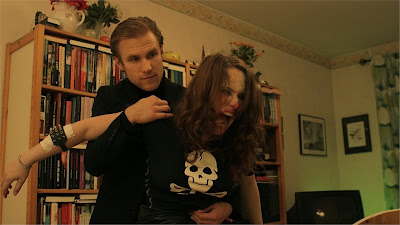 Next up comes a few zombie shorts, the first about found footage of a scientist was hilarious, it had me laughing out loud, short, stupid and fun with some great direction. The next zombie short was set up as an advert, not as funny but it was still a nice little break from the main anthology. This flows naturally into the next anthology tale; My Undead Girlfriend. In this one a man heavily in debt to a surreal loan shark has a plan to marry a rich woman so he can pay off the loan. Unfortunately she turns into a zombie which puts a wrench in his plan. Another light hearted story that brought to mind Peter Jackson's Braindead (or Dead Alive if your American) in the crazy dinner scene. Probably the best acting of all the stories here. Overall acting for Sinister Visions was quite patchy, many of the actors don't have English as their first language so this is most likely the reason why some of their lines come off strange or over emphasised.

Mother Knows Best is next that finds Kim Sonderholm in the leading role. Sonderholm is in most of the tales, almost like the glue that holds it all together, he even directs some of them. I was not keen on him in Little Big Boy but here he is a lot better having been given better roles than the often confusing one in that film. Here a man with a controlling, dominating mother invites over a girl to his house with disastrous results, a far more straight up horror than the ones previous that had a good build up. 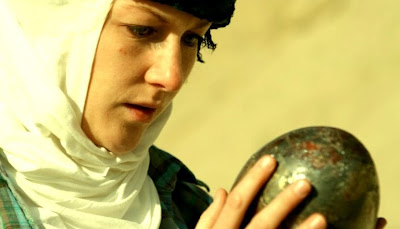 A Woman Scorned follows Mother Knows Best and is about the revenge a woman has on her cheating husband and friend. Quite a grim tale with a soundtrack that borrowed (in my mind at least) from John Carpenter's The Fog. Over acting by the female lead here I felt reduced some of the tension.
Last up is the grim Genital Genocide that has a serial killer on death row talking about the awful crimes he committed with plenty of gruesome flash backs involved. The serial killer has a real presence to him and leads to a fun ending, and also the end of Sinister Visions.

Overall this was an enjoyable film, no one story takes up too much screen time, I felt that maybe having an over arching story tying the separate ones all together would have helped (like the Creep Show films). Good soundtrack, direction and look. Sure it might not be that scary but it never gets time to get boring and has plenty of blood and female nudity (as always if you are into that). Females suffer a lot in this film! If your after something different then this is for you, released on DVD today.

Posted by Daniel Simmonds at 12:16