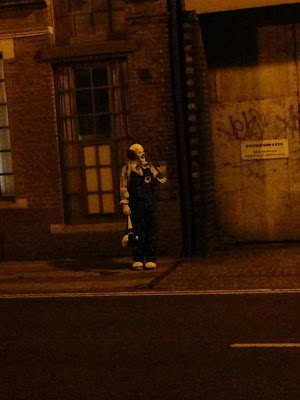 As I live in Northampton I have finally decided I must do a blog post about the so called Northampton Clown that is terrorising the place and who has become an Internet sensation. Northampton has previously been famous for the home town of comic book creator Alan Moore and as the place where an old woman in red beat up a gang of criminals armed with sledge hammers who were in the process of robbing a jewellery store.

The Northampton Clown first appeared on Friday 13th this September, he has appeared in a series of photos waving, or holding a bunch of balloons, dressed much like the evil Clown from Stephen King's IT. A Facebook page has been created called Spot Northampton Clown where the clown has promised that a surprise is in store sometime later this week as well as stating he would be interested in the town holding a Clown Day every week. 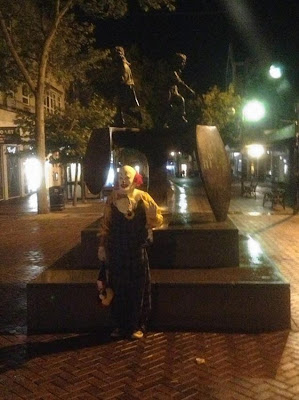 I approve of this, horror is of course awesome and is cool it is happening in my home town even if I have yet to see him/it myself. Would be shocking if his intentions actually turned out to be horrendously nefarious but as he has had an interview with the local paper I assume his identity is already known to some so most likely is just a bit of off peak fun.

The British newspaper The People revealed the identity of the Northampton Clown in a 2 page spread. You can Google who it is if you wish but personally I would not recommend it as it is more fun not knowing.
Posted by Daniel Simmonds at 10:47