I brought The Last of Us for my best friends birthday, I thought it would be a nice gesture giving her a game that I really wanted to play. We played through the game together in the old style of levels and lives but I had enough of an experience with it that I am comfortable to be able to review it.

The meat of the game starts twenty years after the emergence of a worldwide fungal spore outbreak that turned everyone it infects into brainless ghouls intent on spreading their disease. You play as Joel a smuggler in his forties based in Boston which is now a protected area under military control. Through circumstances you and your partner Tess come to agree to deliver a young girl (Eliie) across the country to a Firefly safe houses (Fireflies being resistance fighters who are against the militaries control of resources). The world outside of the Boston stronghold is a harsh place though, full of bands of violent bandits, and of course the deadly zombie like infected. 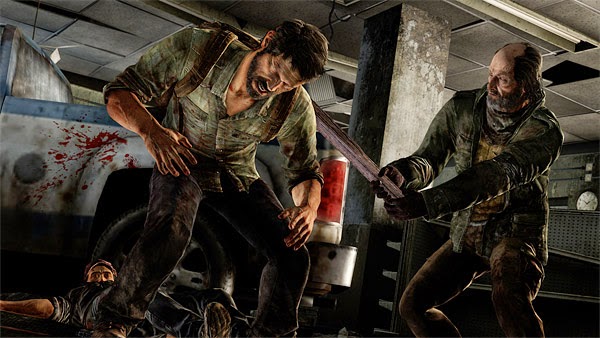 The Last of Us is a third person survival horror that has much of the cover based shooter about it. I was expecting a game that revolved around fighting zombies but I was actually surprised to find out that only around a third of the game has you fighting against these monsters, instead human enemies are your biggest foes. As I always say in the world of zombie apocalypse humans are always the real danger. What blew me away was that I found I didn't mind that the infected only played a small part, the people you fight are usually evil, and have various motivations.

The game takes place over a year and was much longer than I expected. It took us around 14 hours to see the game to it's conclusion and for the whole ride it was a hell of a lot of fun, though fun is perhaps the wrong word to use for such a bleak, dark world. Split between combat and basic puzzles with exploration it can at times feel a bit gamey, when you enter an area to see waist high blockades everywhere it is very apparent you are in for a fight sooner or later. The puzzles on the other hand are simple, and often repeated but never feel boring or outstay their welcome. The amount of times you must find a wooden pallet to ferry Ellie (unable to swim) across a stretch of water nearly becomes ridiculous, but even the characters make a joke about this. 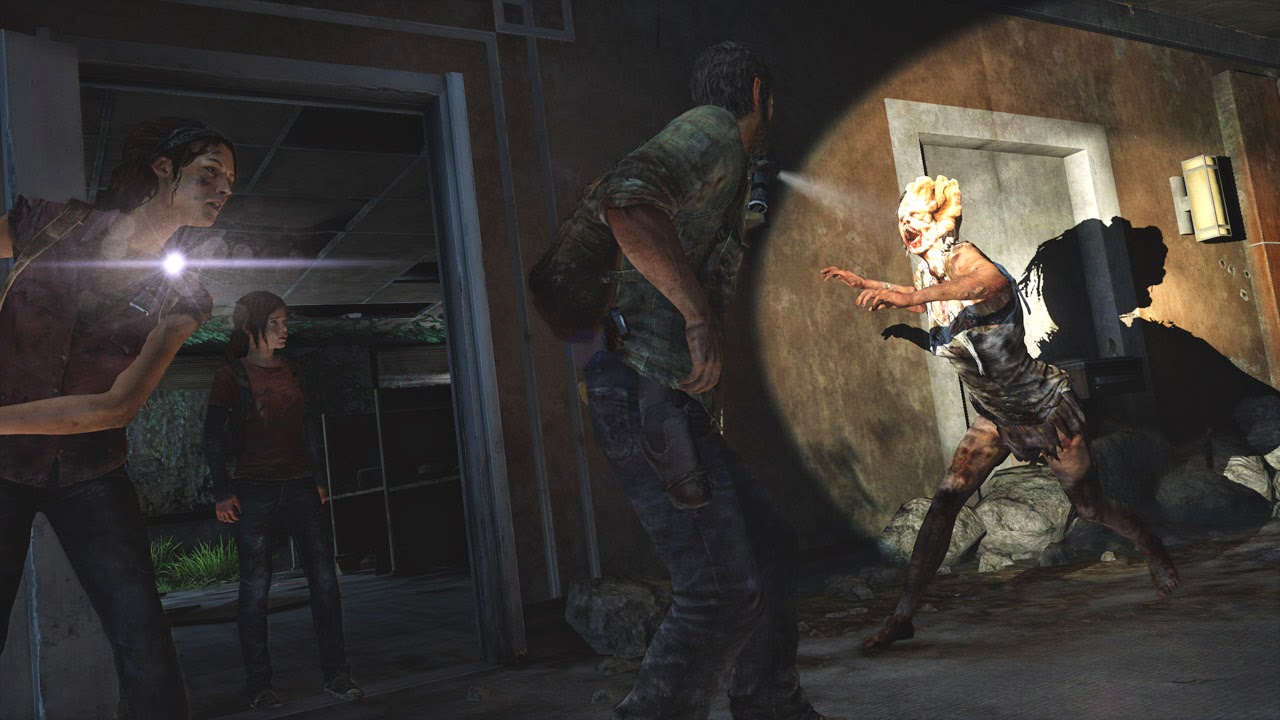 The world of The Last of Us just feels real, it is quite linear but this is disguised well and the game features the very best graphics I have seen on the PS3, it is a beautiful rendering of Apocalypse with vegetation growing through the dilapidated city streets and buildings, rusting cars covered in moss, wild animals running amok. There is a lot of variation as well with not just towns but also the countryside to explore at times. The apocalypse has never looked so damn pretty, a real roadtrip of a game.

Combat is mostly done via guns, there was more gun play than I thought but it is all brutal and quite grimace inducing to watch. As well as an assortment of guns you get access to limited use melee weapons and even a bow and arrows. Bricks and bottles can be thrown to distract the enemies and you can also craft crude bombs and Molotov cocktails. This is a very violent game with Joel messily embedding axes in people and head stomping downed foes. The scream the enemies make as you set them on fire is near harrowing, this is backed up by Ellie your constant companion who usually says 'my God Joel!' after a suitable act of uber violence. A game in which shooting someone with a shotgun close range usually results in them losing their face in crimson gore equals goodness. 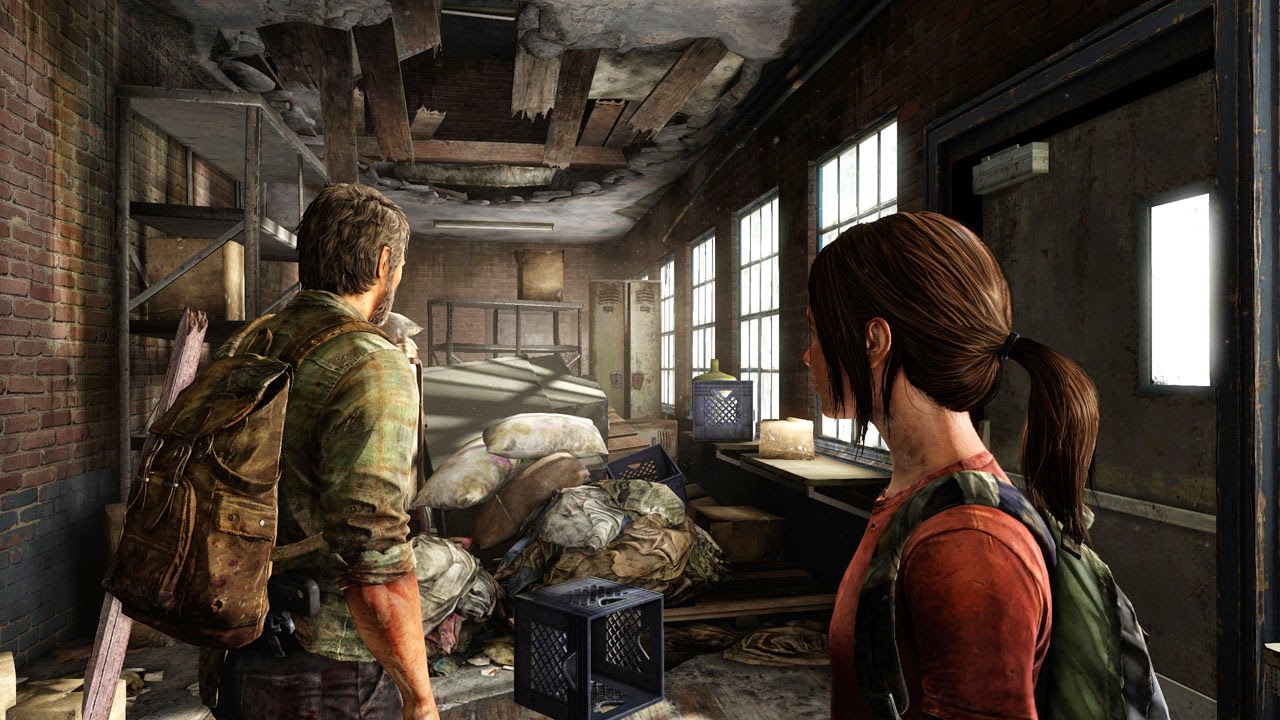 The infected are blind but react to noise and are mostly melee fighters so different tactics are need than the human foes who try to outflank you and hide from your gunfire. If I had one complaint for the infected it is that there is not that many different types, you get the runners, clickers who can kill you in one hit, and large lumbering giant ones who spit acidic pollen pods at you. It is also a shame that you never fight both humans and infected together, that would have made for some great three way fights.

Items hidden in the game world can not only be used to upgrade your abilities and weapons but also can be used to craft items. If you need a first aid kit for instance you must craft one, but the same ingredients are also used to make Molotov's so it is always a gamble to decide what to use them for. Alongside these items are many collectibles that shed more light on the games giving you diary excerpts as well as maps and even comics. 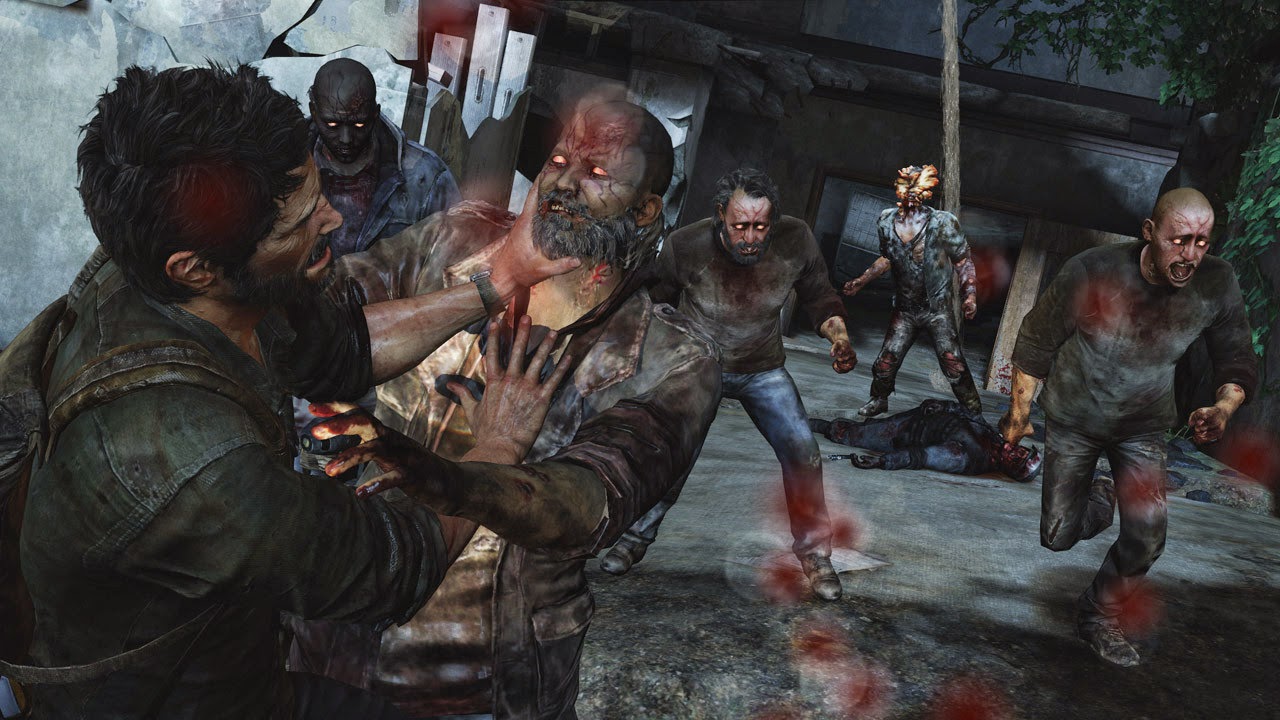 If it were merely a steady diet of fighting and exploration then it would still be a good game but what makes The Last of Us really special is the various set pieces. An early one sees Joel hanging upside down caught in a trap as he is swarmed by infected, a later highlight was a chase by a very persistent armoured vehicle. Horse riding, hunting for food, and even stealth sections all help change up the tempo.

The plot is very well realised. Joel is a morally ambiguous character who it is hinted did some terrible things in the past while Ellie is a jaded youngster who has never known anything but the hell the world has become. The people you meet are all interesting characters, you meet real evil (a great appearance by Nolan North) as well as others like you just looking to protect their interests. The plot is excellent and led to many surprises and horrors, nothing is ever simple in this dark, dark world. While it can sometimes break the realism by characters your with talking loudly and walking around seemingly invisible to enemies they never become a burden and actually help out quite a lot and provide lots of incidental dialogue. 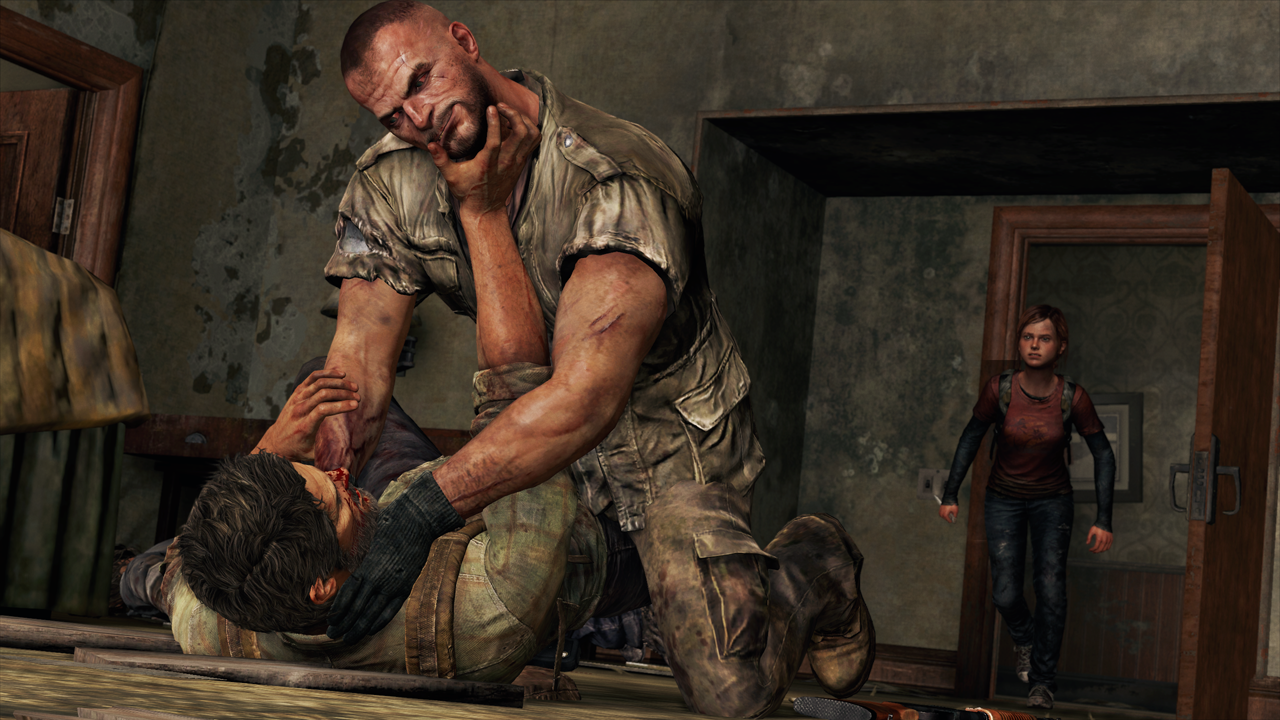 Now I don't know just what the replay value will be like, and the multiplayer while fun did not seem essential, but I believe this will always be considered a true classic. Great looking, well designed and with some fantastic acting The Last of Us is a game that simply must be played. I for one cannot wait for the PS4 re-release (not that I have a PS4 but dreams and all that). A beautiful haunting and expertly crafted experiance.

Posted by Daniel Simmonds at 14:12