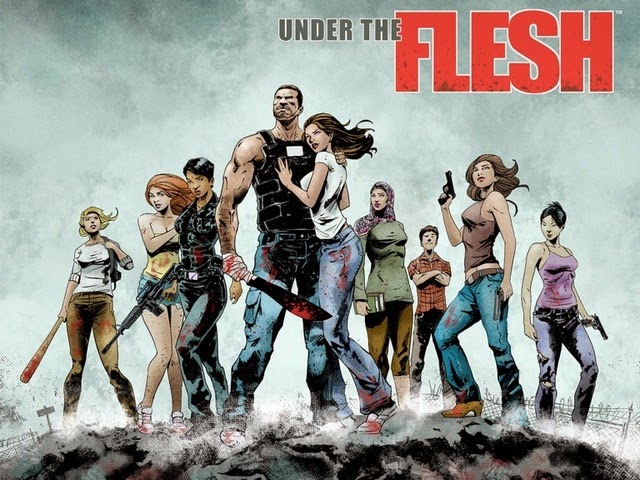 Under The Flesh is a zombie comic (created and written by G.Deltres) that is currently riding a Kickstarter campaign to get issue #1 printed and the artwork done for issue #2. It is all self funded and independent so is going to rely heavily on it's fans to help it keep going.

A global event known as Desolation Day occurs during which an infection sweeps the globe affecting only males turning them into flesh hungry zombies known as 'fleshers'. Under The Flesh follows short tempered Ruben Lobos who was an elite U.S soldier that was part of an experiment to create a super soldier but during the process the pandemic occurred and so he actually has no idea what the extent of his powers are. He joins up with his jealous girlfriend Dinah and a group of mostly female survivors and holes up in a library to try and survive both the zombie threat and the roving bands of hostile humans.

I read issue 1 of this and must say I really enjoyed it. It seems to perfectly capture the spirit of 80's action comics and makes no apologies for doing so. Main character Ruben is all muscles and anger while the females he holds up with all seem to be a variety of stereotypes but this works for the 80's vibe going on. The artwork in particular (illustrations and lettering by J.L.Giles) is fantastic and really gave me a nostalgic hit, even when talking characters strike poses full of expression, Ruben looking almightily outraged and shocked most of the time, delightful stuff. There is a lot of violence with the zombies looking suitably decayed while heads are severed and fingers ripped off. Issue 1 is part prologue giving background information on Desolation Day while also setting up the main plot line.

Being a male afflicted only disease it does look like this will explore themes of female oppression and sexism and the suggestion that maybe the zombies also rape people gives an interesting angle to the usual inclusive infection style. The zombies of Under The Flesh can work together in groups, as well as hide from their prey and seem very much to be of the running variety of undead so I imagine this will lead to some suspenseful encounters.

I enjoyed what I read here, a great throwback to the past and an entertaining read. The bravado and high excitement  might not appeal to everyone but at the very least the artwork is very well suited to the subject matter. Under The Flesh has currently raised $2,877 of it's $3,500 goal and with 13 days to go hopefully it will be successful. If this sounds like your kind of thing you can check out the Kickstarter page here.
Posted by Daniel Simmonds at 11:26