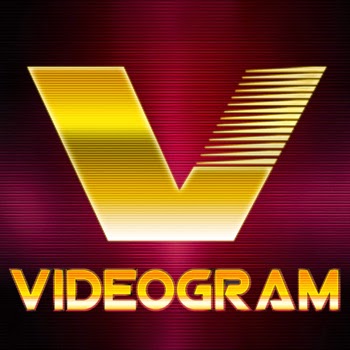 I recently covered Videogram's Friday 13th inspired Camp Blood song and now I have heard Videogram's first full length album. The album was written for the Italian Horror Week and is influenced by the exploitation and horror films of the 1980's.

Creator Magnus Sellergren brings a collection of the most awesome soundtracks to films that never got made, most of the tracks contained here are excellent electronica that conjures up images of Italian classics. From everything from the name Videogram itself to the logo and name of the tracks this reeks of the 80's in the best possible way.

Opening and closing with indents that sound like VHS title cards the album starts proper with Walpurgisnacht that could easily fit one of the great Italian zombie films such as Zombie Flesh Eaters or Zombie Creeping Flesh. I had this on in my car whilst driving through a deserted industrial estate last Saturday and could easily imagine decaying zombies stumbling out of the warehouses and concrete fixtures. If your a fan of Goblin then this is a great track, in fact many of the tracks here bring to mind that awesome group.

Elsewhere Scavolini's Nightmare made me think of Fulci's City of the Living Dead while Subway Stalker would have fitted right in to the original Terminator score. As an aside I love these track names. Other highlights include Charles Bronson that would have been at home in the Doom videogame. These are all great tracks.

Some of the tracks, especially in the middle of the album are just too short for me, there are a few that come in in under 2 minutes in length, the problem is with catchy tunes like this I could happily listen to them for quadruple that time even if they just repeated, they just completely take me back to cheesy b-movies and I don't wish for them to end. The track titled The Eight Passenger feels at odds with the rest of the album having a more traditional horror sound rather than the joyous electronica of much of the other tracks, while they are all supreme for having on while driving around in the car that particular one was more drawn out and less memorable and so my least favourite.

As I am always saying I am not great at reviewing music but if your a fan of any type of 80's horror music then Videogram is something you must check out, I am most certainly going to be listening to it many times in the future, I straight up love this album!

Posted by Daniel Simmonds at 10:57