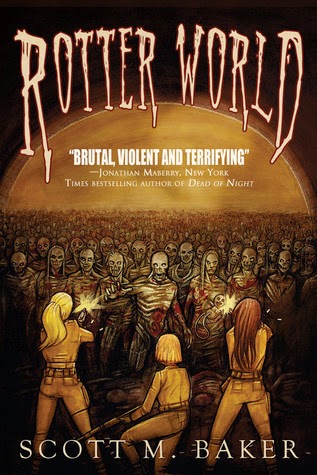 I love zombie books, hardly surprising seeing as I love all things zombies but like films about the undead it is quite hard to make a bad one. Put in heaps of ghouls and plenty of action and your set, though it does of course take skill to write an engaging story.

Rotter World takes place eight months after zombie apocalypse was unleashed upon the world in a coordinated attack by vampires. Vampires in the books world were real but unknown to all but a few groups of vampire hunters. These creatures were being hunted to extinction and so believed unleashing a zombie plague would even the score, not knowing that they too would be the target of the rotting dead's insatiable thirst for flesh.  A small band of humans have survived in this ruined world, they have made an uneasy truce with a bunch of vampires in a protected base. Circumstance leads to the arrival of a Doctor who turns out is the man responsible for creating the zombie virus in the first place. He tells the group that across the country in a hidden government base lies the key to immunity, but to get there he is going to need their help...

As weird as it sounds for a book about fictional monsters I really struggled to get my head around the idea of vampires existing and it took me a good deal of the book to get over this and be comfortable with their presence. They are of the Fright Night style in that they are human in appearance but morph into a different form when fighting. They do add some spice to what otherwise is a generic tale as I can't think of another zombie book which features vampires and this also leads to a unique cause of the apocalypse as well as bring up an interesting dichotomy with parallels to race hate and bias. Some of the back story for the vampires was not so well handled though being ham fisted in places such as allusions that one of the creatures was actually Jack the Ripper which was too far fetched and wasn't needed.

The zombies in the book are referred to as 'rotters' and are made up of shamblers and swarmers. Shamblers are the typical slow moving Romero style ghouls, while swarmers the recently reanimated who can run (such is the modern vogue). I always like it when these two different styles are mixed. While starting off light on zombie action it steadily ramps with seemingly more and more of the damn things interrupting the characters actions. Plus you get to see what a zombie vampire is like (hint: something pretty awesome) and even a zombie baby pops up which is always fun. Another first was just how much of a pain the flies and even wasps that swarm around the undead can be, Again I don't recall another book where the insects around the zombies actually has an impact on events.

Rotter World is split up into three distinct parts. Part one sets up the characters and lays out their mission. I did not find this initial part to be that interesting. I felt there were far too many characters and none of them really stood out for me. Plus there is a lot of friction between the group and so I found myself disliking them for the most part. The second part of the book is a road trip. It is a solid rule when it comes to road trips in zombie books that they are never boring and here is no different. I really began to find myself getting more into the story during this mid part. Finally is the fantastic part three that without going into too much detail is like Day of the Dead in quick step. Everything is set up to go wrong and there are many fore warnings of this but still when it happens my heart was in my mouth helped in no part by the sudden emergence of short snappy paragraphs that helped bring a sense of urgency to everything.

The plot is nothing original or new (except for the vampires) and nothing happened that I did not see coming from miles away. The characters never really established themselves in my mind that well, that is none stood out, instead there was a real good vs evil element and so I was rooting for the good guys because they were the good guys, not due to really caring about any individual. For a zombie book you really don't need to break new ground to have a thrilling story as long as the writing is good and here with Rotter World the writing is good in general, a few missteps with back story (Angels the exception) and a graphic sex scene that wasn't needed in such detail but on the action side it is exciting and easy to picture what is happening in your mind with plenty of gore and violence.

When Rotter World ended I found myself interested to know what happens next, it took me a while but when I got into the book I was hooked. I really appreciate the little things that spiced up a traditional zombie tale, not bad at all.

Posted by Daniel Simmonds at 12:26