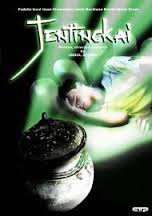 At the end of last year I reviewed Abdul Zainidi's bizarrely titled Ostrich Supernatural Game that was filmed in Brunei. I have now got two other films of his for review both again filmed in Brunei but this time they are shorts rather than feature length films. The first is Jentingkai.

After having an argument with his brother Romu heads out for a walk along a beach, there he finds a mysterious looking urn which he decides to take home with him. Back at home and still angry at his sibling he thinks about how much he wishes he would just disappear forever. Sometimes you should be careful what you wish for, especially when you have chanced upon the resting place of a Jentingkai... 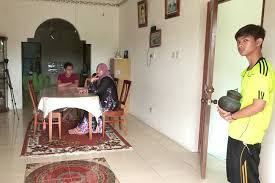 The short plays out like a modern day fairytale there is no dialogue from the characters themselves but instead a narrator speaks over the piece and does so in a story like manner. At just over six minutes long this is very concise and manages to tell a whole story. Like most fairy tales this is a cautionary one that teaches a lesson. Jentingkai is filmed in high quality and doesn't actually call for any special effects at all, instead everything is inferred and explained via the narration.

Some of the physical acting seems to be quite over the top, especially in a scene in which Romu attempts to sneak the strange urn back into his household and sidles by his family quite suspiciously. Being a fairytale I felt this strange type of over acting fitted, and especially without any dialogue from the actors themselves this helped to convey meaning. There is a sinister overtone to the whole short, and while the story was really quite simple it was effective with some creepy scenes involving the Jentingkai.

Overall this was an enjoyable little film that had some decent direction, sure the plot may be as simple as they come but it was done well.

Posted by Daniel Simmonds at 05:48