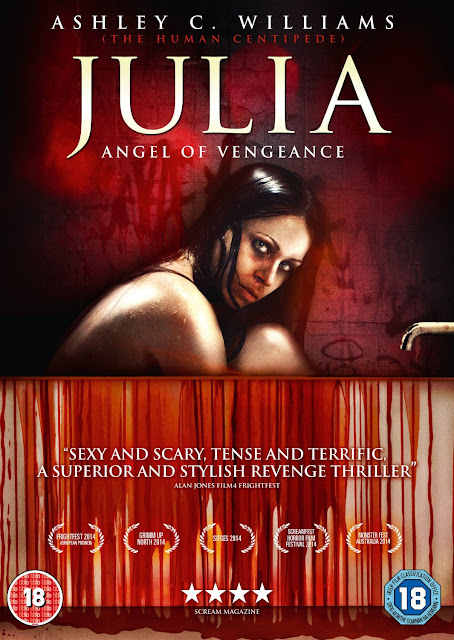 Julia written and directed by Matthew Brown is described as a neo-noir revenge thriller, from my quick Google search it seems neo-noir is a modern day interpretation of the classic film noir style of the mid 20th century (Gilda, The Maltese Falcon). This film certainly has many trappings of that genre such as a troubled anti hero and distinctive use of light and shadows.

Ashley C.Williams (The Human Centipede) stars as the titular character Julia who within literal minutes of the films start has found herself at the mercy of a group of rich kids who drug and assault her before leaving her for dead. Rather than go to the authorities she instead struggles to carry on with her life but a chance meeting with another victim of rape; Sadie (Tahyna Tozzi) leads her to becoming a patient of a mysterious therapist. The therapy involves extreme measures but Julia is warned not to make things personal and go after her attackers for should she do that there will be dire consequences, but feelings of revenge are not an easy thing to let go of...

I thought this was a great film, but I will also add that it is certainly not a fun or one that made me feel good about the world, it left me a bit drained but having had an experience. The majority of Julia takes place at night on the dark and rough streets and clubs of New York, it is populated by awful humans, there is no light or joy to be seen with most the characters having very stony expressions throughout. The set design and tendency for extreme bloody violence reminded me heavily of Rob Zombies style, I love his work so I think it was this that really drew me into the film. Locations are grimy and soulless while there is a lot of blood spilt but in a way that makes it seem almost beautiful with attractive characters covered in crimson.

While a lot of the action is implied super violence there are many gruesome shots, in particular one of a man getting his penis sliced off made me a bit clammy! This could be seen as sexist against men, there are no decent people here, the men mostly coming across as jerks who see females as objects, or things to be abused. There are a few sexual scenes contained her but none have any semblance of love behind them, the gang rape scene played in flashbacks is uncomfortable to see, while later sex scenes are all geared towards a specific purpose, there is a fair bit of nudity here but it is not shown as titillation, but more as a window into this dark bleak world. 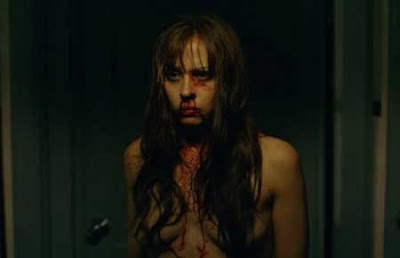 Williams as Julia is a fantastic choice, her portrayal of a severely depressed self harming shut in who is forced to confront the world and take it on feels mostly right. Her transition into a killer seemed a bit too smooth while throughout her voice just does not sound right, but for sheer misery she pulls off a look of numb resolve that makes you feel nothing is going to stop her. The initial character she plays is a far better one than the instrument of vengeance she turns into as it is a far more believable and sympathetic one. Julia has very little dialogue, instead the meat of the film is the sublime soundtrack of dark dance music that pulses and pounds throughout, the film seems at times to merely be an attractive accompaniment to this music, relegated to a music video while the music becomes almost over shadowing of the visuals. The music choices here are so well suited, if I watch this again it is going to be a background film with the music turned up high to enjoy.

The blood looks great, the special effects are saved by quick cutaways leaving much of what happens up to the imagination, there are still some great close up effects though that don't look fake and so do the job. The camera work is top notch with blurring, bright lights, and long shots that stay focused on a character for minutes at a time, best seen in a recurring shot of Julia stood on an escalator. The plot is quite basic and the motives of some of the characters seem a bit strange, the whole therapy idea is not explored that well. much of it insinuated by what happens instead of a smooth reveal. 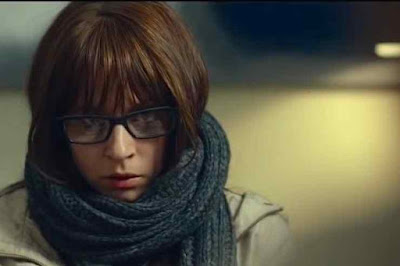 This is not a pleasant film, it is bleak and provides a jaded look at humanity, I'm also unsure if the final sequence was that well done, it seemed a bit rushed and with an ending that was one degree away from what I wished, and feeling like the message Julia tried to impart was lacking slightly. Still this movie looks crisp and clear and has such a uniform sound and set design to it that I have to say I pretty much loved it. Julia is available to buy on DVD and on Digital from 14th September 2015.

Posted by Daniel Simmonds at 08:58