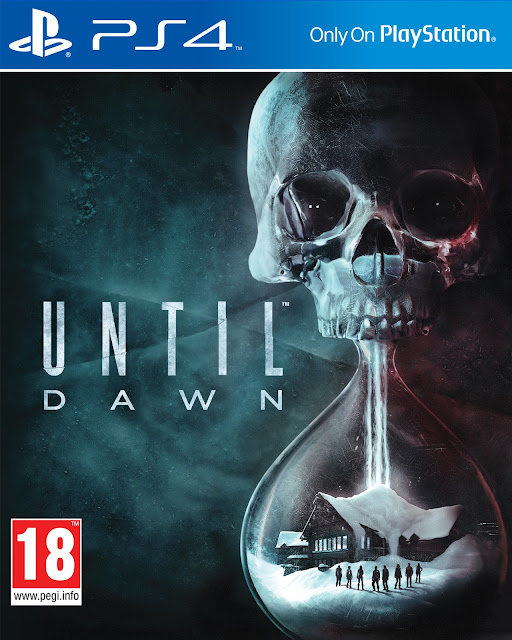 I was waiting for reviews to come out before deciding on whether Until Dawn was a game for me, yet it was actually word of mouth that ended up with me paying full price for this PS4 exclusive horror game. The whole game has been created as if it is a playable teen slasher film and has a far bigger focus on story and decision making than actual gameplay.

Eight teenage friends head to a remote ski lodge in the Canadian mountains to commemorate the passing of two of their friends; twins Hannah and Beth who went missing out in a blizzard after a prank gone bad exactly one year previous. It is not long however before strange events start to happen, it seems there is a psycho on the loose who has it in for the group. From this initial set up a night of terror occurs, all the teens have to do is to survive...until dawn. 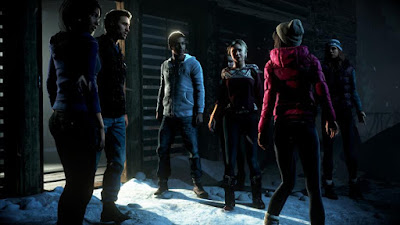 I was expecting a David Cage style adventure here (Heavy Rain, Beyond: Two Souls) and that is exactly what I got but thankfully with a much more tightly written plot as well as more far reaching choices. The plot and characters are what is important here, far more than any sort of a game. Over the night (each chapter representing a different hour) you take control of all eight characters and by your actions they live or die. It is possible to finish the game with all intact, it is also possible to finish the game with all dead. Flipping between eight people is automatic, often leaving little cliffhangers for you to go back to at a later date. You can pick up and interact with items in the environments, though thankfully only key items are interactable, walk around and look for clues as well as steer conversations however you see fit. That is one half of the game, the other half is mainly made up of chase sequences where you are giving quick firing Q.T.E's (quick time events) that see you leaping over obstacles and defending yourself from attackers.

There is a novel system call 'The Butterfly Effect' that shapes how events in the course of the game play out, the motif being that every action has consequences down the line. An early example sees an argument between Jessica and Emily occurring, with control of Emily's boyfriend Sam you can either back her up or take Jessica's side. Your decision here impacts the couples relationship for the rest of the game. A more physical example is that of a flare gun that is found, deciding who ends up with the tool means that somewhere down the line a character may not be able to defend themselves if you decided against them getting it. These are littered throughout the game and in theory create of a lot of replayability. 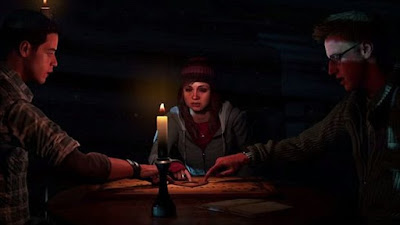 The graphics are fantastic, characters move slightly wooden at times but look identical to the actors who played them. The locations have fantastic use of light and weather effects to them, when you first start up you get asked to adjust the brightness, usually I want to be able to see and so do it higher than recommended but this time I did what it said. At times around 90% of the game world was pitch black with just the light from a characters torch showing the way, this was great and really showed off the beautiful lighting effects. Flaming torches, mobile phone lights, flares and lighters, even a head lamp at one point, this all look great on the environment. It seems to be the dead of winter and so outside it is white with snow, characters leave footprints, shiver from water and ice and as the game progress get visibly beaten up and rough looking that gave a lot of continuity to events.

So is Until Dawn scary? It will make you jump, it will make you jump lots, I had been hoping for an unsettling constant sense of terror but in reality I didn't really feel this. Locations are dark and mysterious (mines, the ski lodge, a distant sanitarium to name a few) but exploring these I never felt like danger was around every corner. About 80% of the jump scares are damn effective though, I swore my head off with fright on many many an occasion, unlike in non interactive media these work a lot better. People or objects suddenly popping into view, doors slamming shut, windows smashing, unnatural screams, and creepy dolls coming to life all got my heart pumping. 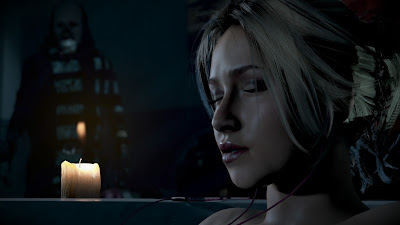 Book ended between chapters are scenes with a psychiatrist (the stand out character) who asks you questions that directly impact the game. Giving you a list he asks you to choose what things give you the biggest fear (such as gore or bugs or spiders etc), even asking at one point for you to list the characters in the order of likability. I am not sure but feel pretty certain these play into what happens in the game. My main choice was gore and it did seem at certain sections this really did have an impact. Talking of chapters there is never a clean break, instead it goes straight into a recap, it would have been preferable to get an option to continue or to quit as I never felt like it was easy to leave the game at a suitable part.

Until Dawn tries to be a teen horror made playable and so it sticks to the conventions of that genre with stereotypical characters (the joker, the jock, the bitchy girl etc) but this helps to make them more identifiable. The actors all do good jobs and so I have no complaints there at all, they fit the vibe perfectly. At least one of my characters seemed to hilariously pretty much manage to avoid anything exciting happening to them, they seemed a bit of a pointless inclusion, again this could maybe change on a different go. This homage to teen horror also goes to the camera angles and score used. There are many angles where it seems you are looking through the eyes of a silent voyeur, or ones framed to make you look small and insignificant, the score is orchestral with screeching violins used to amp up tension. It apes quite a lot of different films, there are definite nods to the Saw series here, as well as The Descent, while there are even some ghost sequences thrown in for good measure. Initially it seems like a slasher, and there is a psycho antagonist but as the plot opens up different horror tropes are thrown in. 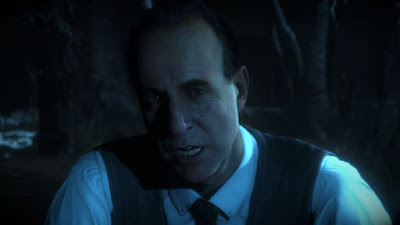 This can be very gory at times with some of the deaths I saw being very visceral (I swear one involved a characters jaw getting pulled off). My playthrough though all my characters survived until the last chapter where I inadvertently killed off five of them with three surviving. It wasn't more than a half hour job to go back and replay the last chapter and have all survive. I had hoped that it wouldn't be that easy to save souls, it makes going back to replay the whole game a fools errand if all the important decisions come down to the final chapter. I don't know myself how different another playthrough would be, I have a friend who is interested in doing this, so I am going to sit and watch her to see how different peoples experiences can actually be. Once shes done the game I will update my review with my findings.

There was much talk of the 'hundreds' of different endings possible but I get the feeling these changes are all minor, likely just relating to dialogue spoken. The ending in particular I felt was a bit lame and I can't see how dramatically different it can possibly be. There is meant to be replayability but for me replaying the last chapter was enough to see that is not something I am going to be able to do for a good while. I understand not being able to skip cut scenes on an initial play through but going back it was quite tedious having to sit through scenes I had witnessed before, maybe after some time has passed that wont be such an issue. There are a load of clues to find, I missed around a fifth of them I think, while totems hidden around the game world (that provide creepy glimpses into possible future events) I only found around half of so at some point I will return. Many reviews speak of a twelve hour playing time, yet while I didn't time it I think I finished at around six or seven hours, what I expected to be honest. The other complaints I have; first unless your in a chase sequence you cannot run, you have a walk and a slow walk (me personally I would be charging round like a loon) and secondly is the Q.T.E. I'm all up for the plot changing due to my decisions but when I fail due to a slow button press it becomes a bit more frustrating. In particular there are certain times where you have to hold the controller dead still, but the rumble makes that hard to do, especially if it catches you unaware, I got frustrated by this at one points, it can be a bit harsh. 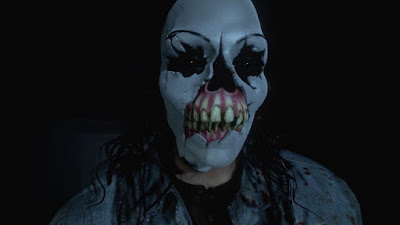 While I have been a tad negative in this review I did really enjoy Until Dawn, it is the best example of it's type and makes for a horror that is different to the norm, one where for the most part it is about the story (simple as it is) shaping events rather than your skill at manipulating a controller. With some truly effective jump scares I felt I did get my horrors worth even if there was no creeping dread I had hoped. Time will tell if the events of the game really are as changeable as has been declared. A great exclusive though and one horror fans should experience.

Posted by Daniel Simmonds at 14:00