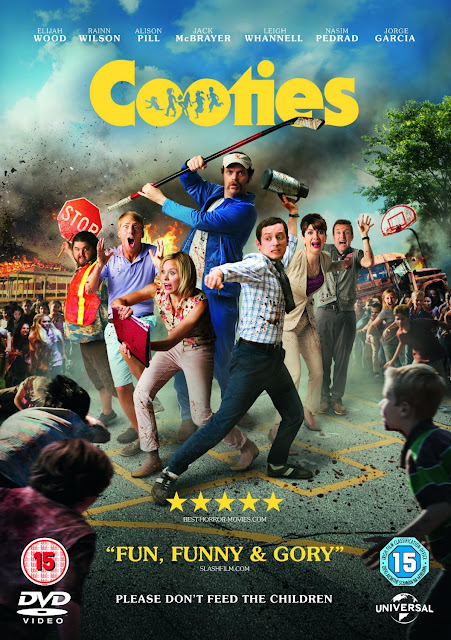 Another day and another review of a film I saw at this years UK Festival of Zombie Culture, this time the film is Cooties; a comedy zombie film set at an elementary school. People have been raving about this in the Fright Meter Awards Committee Facebook page pretty much all year and so my expectations were high, but not impossibly so.

Elijah Wood stars as Clint; a supply teacher who is covering English during Summer School at the elementary he used to go to as a child. On his very first day however he not only has to contend with the other teachers who are a strange bunch (including among them Rainn Wilson as Wade) but he also finds himself at the centre of a viral outbreak which has transformed the majority of the moody students into flesh hungry ghouls. Barricaded into their office the teachers have to try and find away to escape the horrors who will stop at nothing to kill all adults... 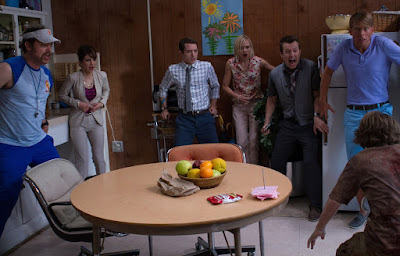 Cooties is really funny in places but compared to Me and My Mates vs. The Zombie Apocalypse it doesn't quite match that script, what it does do very well though is combine real horror with comedy. The children are genuinely creepy as hell, I was expecting some bad child acting but they excel as the zombie like infected who charge around at an alarming rate. In this film only prepubescent children are affected so even if adults get attacked they wont turn. the infected only seek to infect other kids rather than kill them, it is only the adults who they literally rip limb from limb. The most creepy part I can think of was when Clint and his love interest were crawling through some floor vents while a girl on a tricycle cycled around above them with a musical box playing a sinister nursery rhyme.

Much of the humour comes from the eclectic cast and the way they interact with each other. Wilson pretty much reprises his role from The Office, his Wade; the jaded sports teacher is pretty much identical to how he played Dwight, maybe he is type cast but he does a fantastic job, nearly all of his lines are liquid gold and he has great delivery, such as when he is describing his plan to use the school band instruments to battle the children and uses the (para)phrase "It will be a glorious symphony of death", or when he makes a fantastic Lord of the Rings reference when talking to Elijah's Clint that got the whole cinema laughing. Nearly as good was Leigh Whannell as Doug whose straight faced delivery and role as the weird teacher was spot on, Wood himself is not bad at all as newcomer Clint, though the best part for him is a pun early on about the spelling of his name. Other characters I didn't like as much, Jorge Garcia as Rick the school traffic warden had almost a pointless role, just sitting in his van for most the film while Peter Kwong as Mr Hatachi the janitor had a role that relied far too much on racial stereotypes. 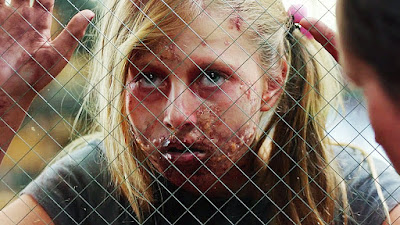 As well as the characters it is also really quite funny the amount of violence caused to the children, any fears they would be spared death due to their age was soon put to rest as the teachers spend much of Cooties shouting vulgar obscenities as they brutally attack the children. Wade at one point has a kid by his ankles and swings him round into an advancing horde while others are attacked with hockey sticks and cymbals, and one particularly violent scene has a kid crushed against a tree by a car. This is all against the infected though and I think it's a concession to decency that they only kill adults. There are a few montages used on both sides, a tooling up one for the adults, and a twisted playground scene that has children using eyeballs for marbles, intestines as a skipping rope, and a severed head in place of a swing ball among other twistings.

There were a few things I didn't enjoy so much with Cooties, first of which is the gross opening that shows chicken nuggets being made (the nuggets are the cause of the viral outbreak), I can only hope that is not how they are created in reality as it made me feel quite ill! The plot is quite predictable and never went anywhere that I found surprising, the setting was solid but there is a definite point where I feel the movie should have ended, instead there is an additional ten minute section that in my opinion wasn't needed and just made me start to feel like it was outstaying it's welcome a bit. 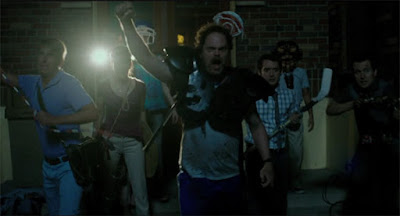 All in all I enjoyed Cooties, while maybe not as great as everyone has made out it is still a decent film that actually had the most horror like moments of any of the films shown at this years festival. Worth a watch just be prepared for the fact that it is pretty generic at times.

Posted by Daniel Simmonds at 10:08