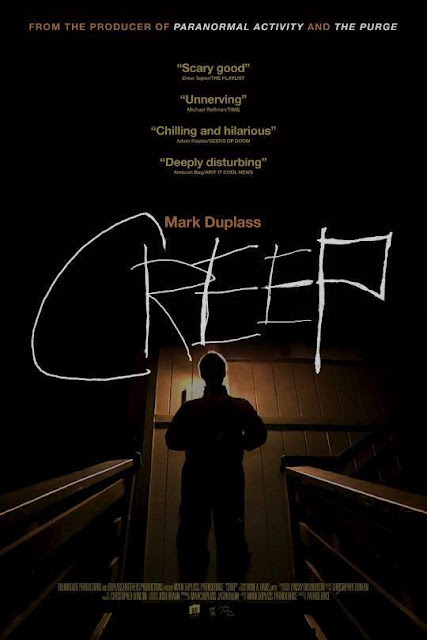 It is December and the cut off point for the Fright Meter Awards nominations is fast approaching and so I find myself panic watching as many of the films up for nomination as I can, it's a good thing I work better under pressure! Today's film was Creep, I knew nothing about it so when it started and I discovered it was from the found footage genre my heart sank (as always when it comes to that genre). The film actually has a recurring motif of hearts and so that last sentence was accidentally clever by the way.

Aaron (Patrick Brice who also directed and co-wrote this) turns up at the mountain home of Josef (Mark Duplass who also co-wrote) after answering a Craigslist ad. Josef has hired him to follow him around for a day filming everything he does. He soon reveals that he has a terminal illness and wants to create a video diary for his unborn son which seems like a decent enough idea, however things soon take a turn for the creepy when the first thing he wants Aaron to do is film him having a bath. From there things only get stranger and it begins to seem like Josef is less interested in making a film for his child to be and more about getting close to Aaron... 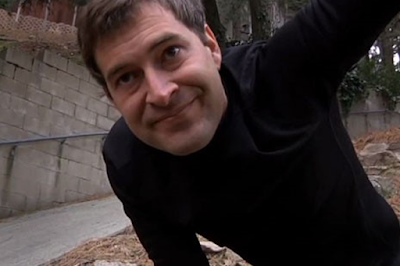 Initially I was pretty impressed with Creep, for a found footage it is well filmed, none of the over the top shaky cam the genre is know for, instead a lot of shots are static, either the camera placed down on a steady surface, or being used stationary. For a film that only contains two characters the acting needed to be spot on and it very nearly is. Duplass is fantastic as the creepy Josef, he steals all his scenes, he has a real presence to him and is magnetising, never sure what he is going to do or say next. Much of the film is him talking to the camera, he sounded sincere and looked it too, not once did it look like he was playing a role. Aaron eventually gets a fair bit of screen time too, his character in contrast just cannot compete, he comes across as more of an 'every' man, a mostly blank cipher whose shoes the viewer can fill. His character makes some questionable decisions at times, enough to get me shouting at the screen.

This is often at times quite uncomfortable to watch, Josef is immediately too friendly and open and seems like a stalker in waiting, it doesn't help that his first proper scene is him in a bath tub pretending to play with a child, made me cringe so much watching. Later both characters have really intimate reveals that felt almost voyeuristic being a witness to, you can really feel the awkwardness Aaron is experiencing, such as when he has to watch Josef doing a silly dance while wearing an amazingly unsettling wolf mask.

Found footage films are known for their lazy use of generating fear by jump scares and there are plenty of those here, but in almost a send up of the genre staples these are all instigated by Josef who gets great delight in leaping out screaming at Aaron constantly, they actually came to be pretty funny as well as frightening. There is a sense of creeping (pun intended) terror throughout Creep, you just know events are going to escalate into something horrific and as the plot unfolds it escalates more and more raising the tension as it goes...then it just dissipates *poof*. After what is one of the scariest points in the film (involving once again a very disturbing wolf mask) Creep seems to start losing steam, it has a second act that just is not as effective, the methods used here are not as good, such as when Aaron heads out to investigate a noise he hears in the dark, or when he sees bizarre videos. There is less Josef in this second half and I think maybe it is losing such a prominent person that the movie suffers. Towards the end I was kind of getting a bit bored but then the ending happens which is an all too brief return to greatness, a great way to finish though quite predictable.

For a found footage I was impressed, this looks and sounds quality and does a great job at making dread build up naturally rather than cheap methods, it is to Creep's merit that this is a scary film. It is just unfortunate that the second half simply cannot compete with the rock solid first, even a great ending is not enough to address this balance, so this isn't an essential view but nonetheless this is solid. If your only ever going to watch one found footage horror in your life then this is the one I would recommend.

Posted by Daniel Simmonds at 08:48