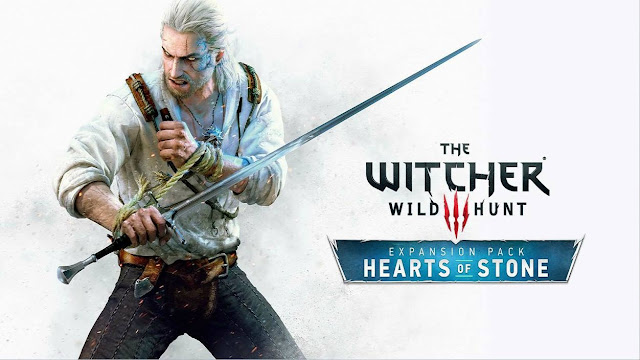 Last week I reviewed The Witcher 3: Wild Hunt and stated I would review the expansion packs should they contain any horror elements. Little did I know that the first and smallest of the two expansion; Hearts of Stone is around 80% horror focussed centering as it does around a Faustian pact.

After a contract Witcher (monster hunter) Geralt takes on goes bad he is rescued by a mysterious man calling himself Gaunter O'Dimm. All the man wants in return is his assistance in granting three wishes to a certain disgraced nobleman named Olgierd von Everec, but the wishes asked for by Olgierd are unified in their impossibility. Should Geralt manage to fulfill these wishes he is promised a great reward, as well as the removing of a bizarre brand that has appeared on his face... 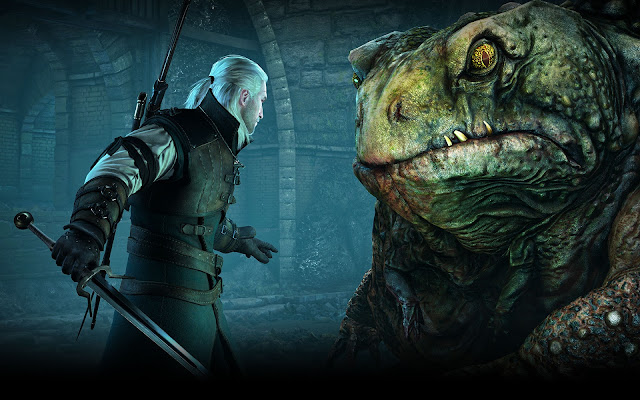 So a great deal of this first expansion pack is pure horror, not least of all the main plot revolving around O'Dimm who it soon becomes apparent is the Witcher world's version of the Devil. He was a great character coming across as quite sinister, helped by an excellent theme tune for him. I know not what the price of this first expansion pack was, but in total you get around ten hours worth of game. There are but a few side quests, the main meat being a series of missions that see you fulfilling Olgierd's wishes. The side quests you do get result in both a set of new armour as well as the option to bind runes to your armour and weapons. Both of these are unrelated to the main story and felt a bit tacked on, saying that I did appreciate getting new, stronger armour!

There are plenty of great horror moments here, from stalking a huge monster in the sewers beneath Oxenfurt, to the whole mythos around O'Dimm, and a spectral walk around the inside of a painting where you learn the bleak back story to the pact. One such quest is combat free and sees Geralt attending a wedding with a character he hadn't seen for a long time. This quest sees the Witcher possessed by a friendly ghost; Vlodimir von Everec and showed a lighter side to the more serious nature of the other parts. Voldimir is really given character, I found it hard to dislike him and there are genuinely funny moments with this quest line. 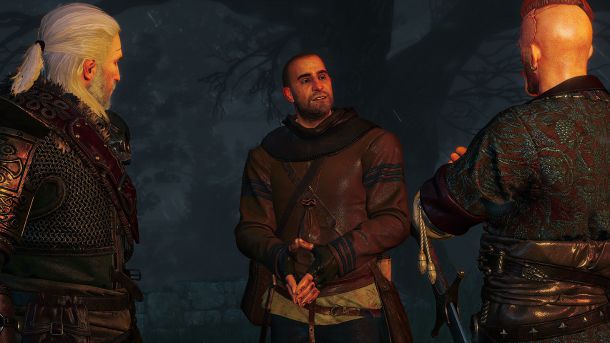 The middle part of Hearts of Stone sees Geralt needing to arrange a heist to rob an auction house. There is no horror in this part but it is satisfying with branching paths available depending on who you recruit to assist in the heist. There was a cheeky reference to the Goblet of Fire (from Harry Potter) here. The third main quest again goes back to pure horror with an atmospheric trek around a haunted mansion complete with demonic beings and even a boss encounter with a creature that looks like it walked right out of Pan's Labyrinth, even some parts there that would not seem out of place in Silent Hill! While you might feel disappointed by the lack of side quests the main missions are so wonderfully written, they are actually preferable (to me) to any of the main missions from the core game, the level of writing for the script is amazing.

I found The Witcher 3 to be a very easy game to play, this expansion is certainly harder which is only a good thing. With new enemies and bosses to fight, new armour and weapons and plenty of new characters this really isn't more of the same, my one slight complaint is that there isn't many new areas to go, the expansion for the most part takes place all on the main map, though on the right hand side of the map which was barely touched upon in the core game. A fantastic expansion which I completely recommend, if you have The Witcher 3 you need to get this, especially if you wanted more horror moments than the main game provided.

Posted by Daniel Simmonds at 14:16