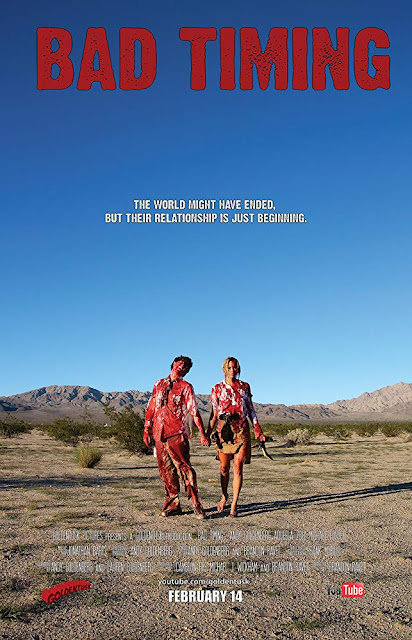 Towards the end of last month I received an email telling me about the season finale for season 2 of the zombie based romantic comedy Bad Timing. I hadn't actually ever heard of this critically acclaimed show and so felt a review of both seasons was in order. Season 1 is made up of 15 episodes but in a neat twist each episode is only a couple of minutes long meaning even when the episode didn't resonate with me I knew it was only a short wait until the next one would start. Now excuse me if some parts of this review are hazy, while I watched this on Friday life got in the way and it is only now a few days later I am able to write this.

Bad Timing starts the day of zombie apocalypse, but rather than show the outbreak it instead shows us our two characters who have survived the chaos and managed to get away to a remote desert property. Andy Goldenberg stars as Andy; an awkward I.T guy who managed to get rescued by the beautiful Eve (Aqueela Zoll - Dances with Werewolves) as she made her escape from the office they both worked at. The romantic comedy aspect comes from the fact that Andy has had a crush on Eve for years and now he thinks as they are possibly the last two humans alive that his chance has come. Eventually a third wheel appears who may put some complications on Andy's dreams. 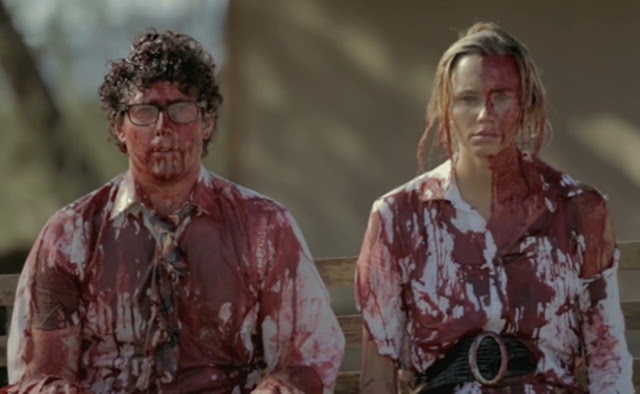 I actually first heard of Bad Timing when I watched the top 20 entries for last years 15 Second Horror Film Challenge. I said then that it was my least favourite of the entries, however within context I imagine that clip would not have been so bad. This show starts off really well. Andy and Eve both covered head to toe in blood and gore sit on a bench swing together as Andy in his awkward way babbles on making a load of inappropriate jokes and culminating in telling Eve he is in love with her. Meanwhile Eve is traumatised and barely able to cope with everything going on. I loved this initial dynamic. Of season 1 Andy is the highlight, his lines are often witty and weird that makes him an entertaining character, plus the fact that he has to make do with wearing women's clothing due to no other alternative was endlessly amusing. Eve on the other hand is the 'straight guy' character so she doesn't really have much humour other than to react to what Andy says.

The first third of so I really enjoyed, the low key desert setting and the two interesting characters were a delight to watch, but then the third character appears which brought my enjoyment down a bit. The third character is this (ridiculously) muscled handsome man who is the absolute opposite of what Andy is. From this point on Bad Timing becomes less about the apocalypse and focuses more on the interactions between these three with Andy's character getting more negative aspects to his persona as he attempts to compete with this man. It was still enjoyable but it seemed to lose a little of the magic that the first bunch of episodes had conjured up as the episodes felt a bit more similar to each other. Most of the time it was all still entertaining, I really liked how the episodes flowed into each other with only a few occasional duff ones. I'm never one who enjoys jokes about sex based stuff and so one based around Andy being visibly aroused, and another about him trying to deal with the loud noises coming from the bedroom did not appeal to me at all. There was only really one episode I didn't enjoy that much, that one being a dream sequence that seemed to be a parody of the bar scene from The Shining and which felt out of place. 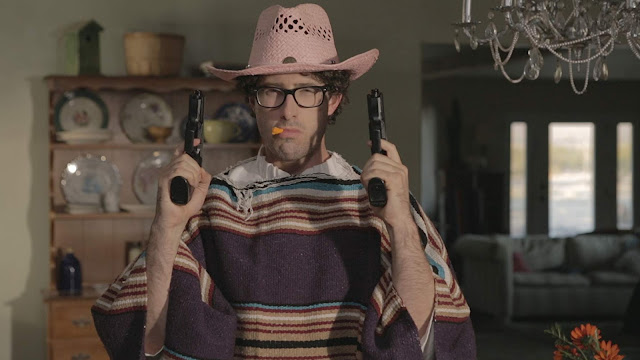 This takes the brave move of having a zombie based romantic comedy but not actually show any zombies at all, the most we get is a groan off camera at one point. Even more weirdly though this actually worked. The show after all is about characters not about the undead and it is ever funny to see Andy faint whenever he thinks he has seen one of the undead (which is also how he was first discovered by Eve). This aspect leads up to a season finale cliff-hanger that wouldn't have worked should the figure have been shown on screen.

Bad Timing is an enjoyable web series that I enjoyed watching. While some elements I did not like as much as others the short length of each episode means there is always something different coming up. The desert setting not only looks pretty, but also explains away the need for undead. I shall be watching the second season soon and am looking forward to see where the show goes next.

Posted by Daniel Simmonds at 02:58