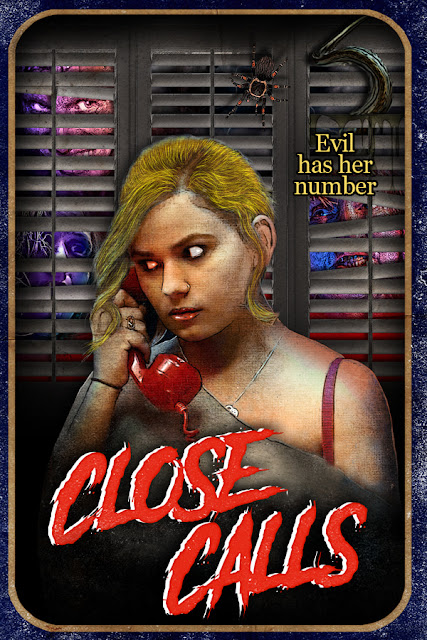 It is very early into 2019 so I know this won't sound like much, but Richard Stringham's debut feature film Close Calls is the best film I have seen all year. Sometimes watching a movie you can tell right off the bat it is going to be one that just sings to your particular sensibilities, and that was what I was faced with here. Apparently chunks of the story were conjured up while Stringham was on hallucinogens, if that is the case it is quite believable as Close Calls is just plain crazy in the best possible way.

Morgan (Jordan Phipps) has been grounded by her father David (Kristof Waltermire), and so finds herself home alone one dark night while he is out on a date with his snobby girlfriend Brynn (Carmen Patterson). Home alone that is except for her insane grandma (Janis Duley) who is kept locked up in an old wing of the house. The night gets off to a good start with Morgan taking a whole cocktail of drugs, but soon she finds herself being harassed by a deranged caller, and events eventually take a even more sinister turn where she finds her life at risk...

I knew while watching this it would be a tough film to review and it is, this is due to the structure of the piece. When I first started watching this and saw it was over two hours long I admit my heart sank a little bit, I felt that I may be in for a really boring time, yet the dreamlike nature of the entire work was so consistently fantastic that I was just hooked. This is a horror film, but it is one that takes its time to ramp up. For the first hour and a quarter there is a sustained feeling of mild horror yet nothing much really happens. Rather than be frustrating though this added to the dreamlike feel. You know those dreams where you really need to get somewhere but no matter what you do it seems to take eternity? That's the feeling I got here. It is hard to explain but this stretching out of relative nothingness was just enthralling, I loved just getting a glimpse into the messed up world of Close Calls.

The main plot itself doesn't get going until the second half so I can't really talk much about that for spoilers. But the lead up to that I can more so. Roughly half of the film just features Morgan walking around her giant house. Mixed in with her casual drug taking is visits to her deranged grandma, as well as random visitors to the house, such as her male deviant friend Robbie, and her father's work associate Barry (Greg Fallon in a scene stealing role). All these have very memorable scenes that add layers of insanity to this drug trip of a movie. Even when everything is relatively normal things feel weird and bizarre. Her grandma's room for instance looks like a witches hovel: cobwebs everywhere, rats and tarantulas crawling about. There is little explanation for anything here which just adds to the feeling of being in a surreal dream. By the time the credits rolled so much random deranged things have happened that it felt like the visual representation of someone trying to explain what they had dreamt about the night before.
Some very dark things happen here, the dialogue doesn't shy away from all manner of vulgar words, while there are some uncomfortable scenes including attempted rape and molestation. There is also a fair bit of violence with some nice effects of people getting stabbed, bitten and punched.

The cast is both amazing and awful, but it worked in the context of the style of this. Morgan is a great lead who has to go through a lot of terrible things, yet she is a character that while deeply flawed (such as her drug use and lack of respect for people) is also a strong character whose flaws give her the strength to deal with extreme situations. You could say the fact she spends a lot of the film just in her underwear is titillation for the viewers, but it also makes her a more vulnerable looking character, plus with her home alone it makes sense she wouldn't feel the need to dress more conservatively. Friend Robbie is a creep, yet the familiarity he has with Morgan comes across as something borne of a long friendship, or whatever is akin to that in this world. Duley was bonkers as the grandma with it never explained what exactly is wrong with her. I assume she had dementia, but the way she sometimes speaks in a distorted voice I wouldn't be surprised if she was actually possessed by a demon, which would explain her being locked up! Waltermire and Patterson played the least interesting characters, but their performances did grow on me, especially Brynn whose exaggerated way of talking I at first thought was down to over acting but seemed more intentional as the film went on. The stand out actor though was Fallon who had such an aura of creepiness. The first time he is introduced was my favourite shot of Close Calls, he had a face the camera just loved!

This is all tied together by an eclectic style of directing that factored in so many types of camera work, cinematography and editing. There are trippy drug sequences where characters face bend and distort, where scenery morphs and changes (such as a mounted deer's head whose eyes turn jet black, before it vomits straight onto the camera. There are extreme uses of primary colours such as rooms bathed in green or red, there are screen cuts that seem comic book like, near subliminal images, basically a whole variety of effects. I guess you could say it is inconsistent, each new way of filming or editing is often used once and then discarded to be replaced with yet another type. This can lead to a slight feeling of disjointedness, as well as showing an obvious love of iconic past horror directors, I saw nods to everyone from Dario Argento to John Carpenter to Wes Craven here This has the look and feel of an 80's Italian horror, helped along very much so by the sublime soundtrack, it was gorgeous stuff.

Close Calls is a film I had tremendous fun watching. Rather than make things seem dull the extended length actually benefits this by really pulling you into the experience. While things soured by the end I still felt a bit sad to be leaving that surreal world behind. This subverts so many normal tropes: having an important plot fade away and seemingly be forgotten while a new plot takes over for example should come across as bad writing but instead it lingers unspoken and adds a layer of tension that is nice to think about. You can probably tell but I damn well loved this movie! Close Calls was released across multiple digital platforms last Friday (11th January) thanks to Terror Films, check out the trailer below.

Posted by Daniel Simmonds at 14:40