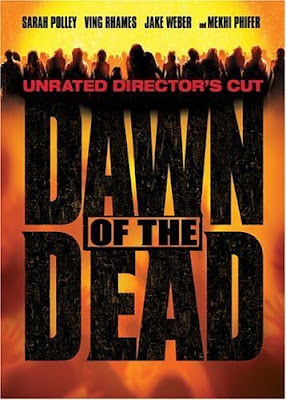 I watched the remake of Dawn of the Dead again last night, first time this year I've seen it. It is officially a classic zombie film now, I feel I have watched it enough times to warrant it that. Sure people moan about the running zombie trend, but I think there's room for both types of zombies, as well as talking zombies (like in Resident Evil 4, and the fantastic french zombie film The Grapes of Death (watch it, it is fantastic). First of all, this is not a remake. Apart from the location of a shopping mall it has virtually nothing in common with the amazing original. I guess its good being classed as a remake after the bother Dead Rising had just for being set in a shopping mall. This is more of a homage to Dawn of the Dead, or a re imagining.

The basic plot for this film is that after the beginnings of zombie apocalypse a group of random strangers have holed up together in a shopping mall. These include a nurse, a TV salesman, a cop, a criminal and his pregnant girlfriend, and some mall security guards. Later on these are joined by more survivors arriving in a lorry. They spend a lot of the film in the mall, then get bored and decide to try and find somewhere else to hang out. 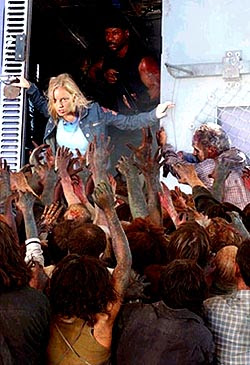 The film is quite violent in places (such as someone accidentally being sawn in half with a chainsaw), and also has an air of humour in places, and a sense of constant dread. There are some cool touches, such as Andy the gun shop owner stranded on his own, a block away who communicates with the mall survivors via whiteboard and binoculars.

Some of the characters are really cool. Ving Rhames as the cop is really really cool, and the chief security guard starts off as a bit of a heel, but by films end has become a really great member of the group. There are weaker characters though. The criminal and his girlfriend are dreadful. Why the stupid zombie pregnancy scene needed to be in the film I don't know, it is definitely the worst part of the film (though the zombie baby is cool). Zombie Flesh Eaters 2 proved zombie pregnancy scenes just do not work well. 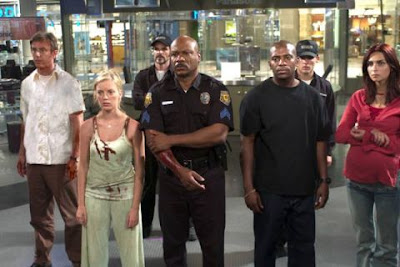 The film ramps up to high levels of excitement by films end, and has some cool effects. The additional footage during the films credits took away some of the mystery of the characters fates though, giving the film a bit of a downer. The music throughout is ace, from the opening music of Johnny Cash to the end credit music of Disturbed.

The directors cut has nearly 10 seconds of additional footage, wow. A great film!

Posted by Daniel Simmonds at 04:05