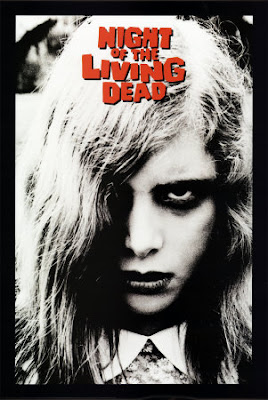 Taking it old school, the very first (with the exception of Thriller) zombie film I ever saw. There are various versions of this film out. This is because the film was never copyrighted, so it is open domain, available to anyone who wants to sell it. It was originally black and white, but the first version I saw was one with colourisation added to it which made it look quite bad.


Everything about this film is fantastic. Though it was made in the late 60's it is still quite violent in places. The Hitchcock-esque murder of the mother by the zombie child via garden trowl is still shocking today.
The plot is simple. There has been a zombie outbreak, various people take refuge in a country farm house. These include a girl called Barbara who had been visiting a nearby graveyard with her brother, a family ruled by a angry little man, a young couple, and Ben, the 'hero' of the piece. As the night wears on more and more zombies turn up to lay siege to the house. Defences are built, the survivors need to hold out until help arrives. 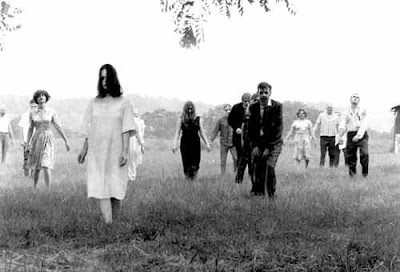 This is the best siege film. The stress and strain gets to the characters as they formulate various plans, and argue amongst themselves. TV and Radio give the apocalypse greater scope, and the tension really ramps up as more and more zombies turn up to pound on the walls. Being black and white the ability to discern who is infected and who is not is made harder, giving the whole thing more believability. The film starts with Barbara being teased by her brother that a strange man they see in the graveyard is going to get her. The original black and white you cannot tell that the man is a zombie. In the coloured version the man is green so looses something in transition.
This film does a lot of conventions and turns them on their head. The hero of the piece is a black man (for 1960's this was not very common). The antagonist of the survivors actually has the one decent plan which would have ensured their survival. The young couple get killed in a ridiculously inept way, rather than being the focus of the film. The one survivor is mistaken for a zombie and killed.
The film goes along at quite a quick pace, the small location doesn't get stale, right to the very end the threat increases and increases. The ending is very bleak, and very well done, the hunters throwing the dead survivor on a heap of bodies and burning them.
There was a remake in the early 90's, I only watched that one, it did somethings different, but no where near as good. Also recently Night of the Living Dead 3D has been released with the fantastic Sid Haig in it.
Night of the Living Dead is a fantastic film, but then you already knew that didn't you?

Posted by Daniel Simmonds at 14:29