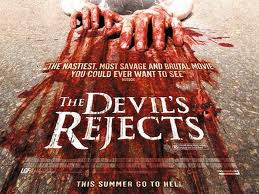 Rob Zombie is one of my favourite Directors, his style of directing along with his affinity for grimy, seedy locations and ugly violence makes him stand out.  The Devil's Rejects is the sequel to House of 1000 Corpses but where that was a pastiche of films such as The Texas Chainsaw Massacre and The Hills have Eyes this is more of a road trip film.  The first film focused on the victims but this time around the villains are the stars of the show.

The film starts with a Police assault on the dreaded 'House of 1000 Corpses' of film one.  With Firefly family members arrested and killed two of the psychos manage to escape; the crazed Baby (played again by Rob Zombies wife) and Otis; her brother.  They call the clown Captain Spaulding (yet another family member) and warn him of his impending arrest.  Arranging to meet up at a pre arranged location they head off to a remote Motel out in the desert.  Hot on their heels is insane Sheriff Wydell who is after their blood due to the murder of his brother (in the first film).  He believes he is on a mission from god and is only interested with revenge, he has no desire to see the remaining family members arrested. 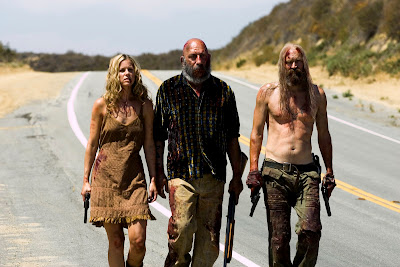 The Devil's Rejects looks beautiful with the dusty desert setting and 70's feel (appropriate seeing as the film is set in the 70's).  Some of the special effects are done digitally which is sadly apparent, this is mostly confined to gun shots.  By focusing on the bad guys instead of innocents the film risked becoming too dark but humour is injected into proceedings to make them at least vaguely rootable.  After a nasty first third in which a travelling music band are butchered in their Motel room things lighten up as the 3 Firefly members reunite and head on their road trip to an old friends strip joint.  It is here where you really see the bond these three have,  played out through a few funny travelling scenes.

Sheriff Wydell is truly insane, and not a character you can root for despite him being the films 'good' guy.  His methods are cruel and brutal but deserved, the Firefly family are evil and deserve to be punished for all the innocent people they have killed.  Seeing the shoe on the other foot for a change is good, a whole night time sequence late in the film is an amazing piece of directing with events turning into the surreal.  Violence runs rampant through the film, as does a theme of torture and revenge.  The effects are mostly good and appropriately wince inducing (such as when giant nails are hammered into someones hands).  The films ending is amazing, bringing to mind the fantastic end to 'Butch Cassidy and the Sundance Kid'.  The soundtrack really amplifies this with a 70's feel and including the classic Free Bird. 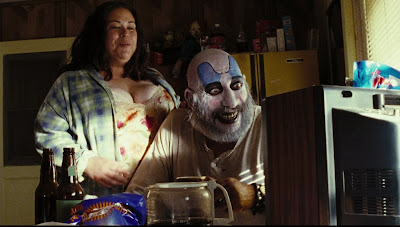 I know this review is not great, disjointed and meandering but thems the breaks, sometimes you just gotta ramble till its done.  All that matters is the score right?  Plenty of violence, nudity and grime provides an entertaining and brutal road trip.

Posted by Daniel Simmonds at 13:22

Oh, man. Haters be damned, but I do so love this movie! I enjoyed House of 1000 Corpses as well, but when this one came out it, to me, served to show the weaknesses in the previous entry. Not much of a fan of Zombie's Halloween films--especially the second one. I'm hoping that he sticks to original concepts from here on out.

Pretty good horror film overall. Rob Zombie hit his stride with this one, I think.