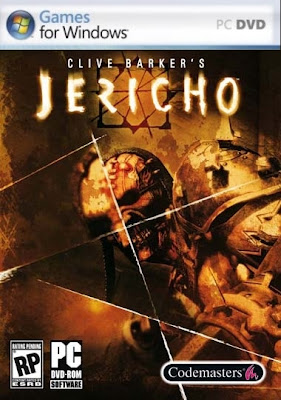 Jericho is a horror themed first person shooter released back in 2007.  It received average reviews at the time despite looking, sounding and being a competent game.  The game sees you as a disembodied spirit who is able to possess 6 different members of an elite paranormal squad of soldiers each with their own weapons and set of abilities.  The games story was written by horror master Clive Barker.

At the beginning of time God created a failed being called The Firstborn, being too powerful God sealed it away.  Throughout time the Firstborn has manipulated people into trying to free it from its prison, to combat this an order of priests called Jericho were created to close the breach whenever it was opened.  In the lost City of Al-Khali the breach has once again been opened, this time by cultist Arnold Leach.  The present day members of Jericho are dispatched to close it.  Each time it has been closed through the ages it has taken a bit of the time period into the Firstborns prison meaning each time more and more of the Prison must be battled through. 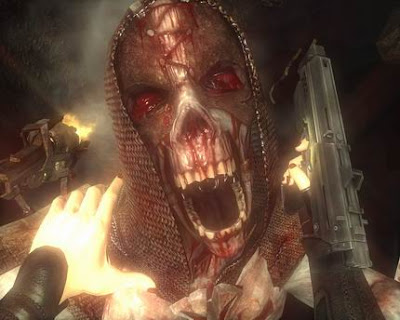 The locations in this game are really cool, a trip through time via the 1940's, the times of the Templar's, Roman times and Sumerian.  Each time period has its own distinct look, feel and even sound to it with the enemies changing to reflect the period also.  In the 1940's you battle monsters with guns fused to themselves, going back you get enemies with flaming crossbows, Centurions who fight with spear and shield as well as a host of cool bosses.  In each time period within the Firstborns prison a different key figure is in control who runs that particular layer.  1940's sees you fighting the zombie Nazi Hanne Lichthammer for instance.  Each time zone has its own story which gives weight and believability to the world.

You control a disembodied spirit (someone who is killed in the opening chapters).  You can possess the other team members at will who each have different magical powers.  Xavier Jones is able to project his mind onto enemies, Abigail Black has telekinetic powers (such as being able to control her sniper rifle bullets), Frank Delgado controls a Fire Spirit, Billie Church can use blood magic to bind enemies, Simone Coal can distort reality, while Paul Rawlings can heal the squad.  Each has their own distinct feel but for the most part I stuck with Black with her grenade launcher and magical sniper rifle only really changing to other characters when I was in a confined space. 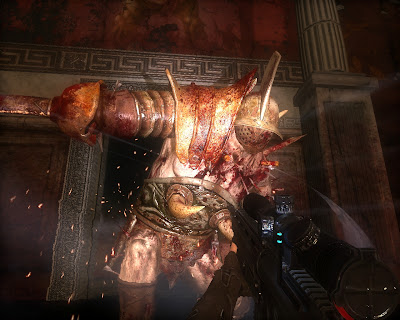 The game looks really good, each location has a real solid feel to it.  The violence is continuous but as your only fighting monsters never feels over the top.  Popping enemies heads in two is always satisfying, as is blowing them into smithereens.  The blood on the enemies does look a bit like jam being really thick, but there is plenty of it, even rivers of the damn stuff!  Most the time you will trigger waves of enemies who will advance towards you while you hold your ground and tactically take them out.  Most annoying are explosive enemies who must have their weak spots destroyed before they reach you and explode. There are times when squad members get separated which add some depth, especially sections where you only have access to one member making those sequences nervous affairs.

When a team member is downed they don't die, they fall to the ground awaiting your healing to bring them back.  Only when all 6 members are downed do you really die.  Loading times are quite long and there are a few ill advised quick time events but overall the game is lots of fun. It is a bit odd that the further back in time you go the easier it gets.  The opening levels full of machine guns and mortars are a lot harder than later stages.  By the time you reach the Sumerian levels enemies do not even have projectile weapons anymore!  The bosses are quite cool though, each quite different to the last (a favourite of mine was a fat man suspended by chains who rips open his own stomach to spew stomach acid at you!) 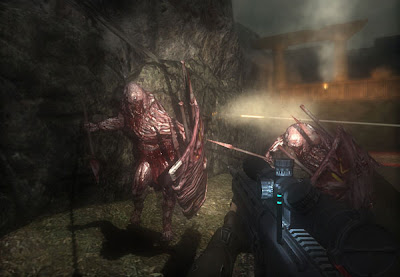 I have recently replayed through the game on Hard and had lots of fun with it showing that time has been kind to it.  The game is very cheap now so I recommend if you after a decent FPS that is a little different that you pick this up.  Also on the PC and PS3.

Posted by Daniel Simmonds at 03:50