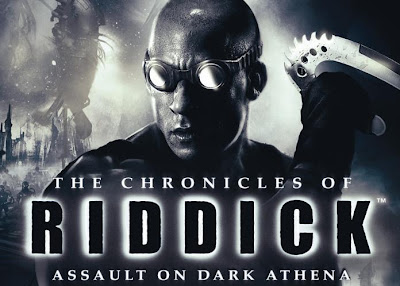 The Chronicles of Riddick: Escape from Butcher Bay was released on the original X-Box, at the time it was a special game due to its level of immersion that saw your first person body reacting as if it was a real person. Re-released for the X-Box 360, PC, and PS3 it saw the inclusion of a new campaign; Assault on Dark Athena. Two separate games so I will treat them separately, so first...Escape from Butcher Bay.

The Chronicles of Riddick: Escape from Butcher Bay

Bounty hunter Johns has captured dangerous criminal Riddick and has brought him to a harsh desert planet were the galaxies most harsh prison is situated. Johns hopes the bounty for capturing Riddick will settle the debt he owes the prison owner Hoxie. Riddick vows to escape (hence the title!). The rest of the game sees Riddick constantly escaping and constantly being recaptured and put into more and more secure prison areas.

Back in the X-Box days the sense of location was amazing, it helped that for the time it was a very good looking game. The prison is detailed and has a sense of believability with graffiti everywhere, grime, blood and a vast population of NPC's who are constantly talking between themselves giving a sense of place to the game. Half of the game sees you interacting with fellow inmates and guards, doing side missions for them that reward you with money, cigarettes (that unlock artwork) and a clearer goal to escaping. The other half of the game is a combination of stealth and action.

For the most part Riddick is weak, sure you can snap necks with the press of a button if catching a guard unaware but if they see you their guns quickly take you down. It is a process of sitting in shadows, timing your movements, waiting for guards to do their rounds. All very old school stealth that doesn't really hold up nowadays, it is boring a lot of the time. Even with guards down you can't (at least to start with) use their weapons as they are DNA locked. 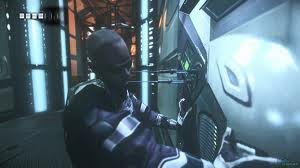 The game is split into 3 acts; the hub area where the previously mentioned side quests are, the stealth escape sections, then the balls to the wall crazy sections where you are an unstoppable killing machine (usually thanks to a conveniently placed mech suit). The power sections may be easy, but that is the reward for all the weak stealth leading up to it.

As a remake it is ok, is just a shame the mechanics of it all feel so archaic, the later arrival of some terrible looking creatures do not help matters, it all feels so last gen and simple. The plot is not especially interesting and towards the end I was quite bored to be honest, and forever on the verge of death thanks to super tough mechs. 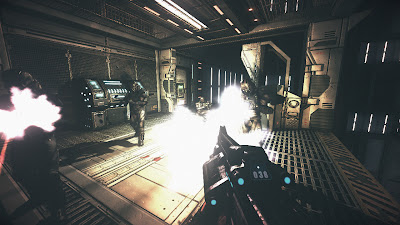 The Chronicles of Riddick: Assault on Dark Athena

Assault on Dark Athena is a newer episode and so feels a lot fresher and modern in feel. It is roughly equal length to Escape, and features two distinct segments. Set after Escape your ship is captured by renegade mercenaries led by pirate Gale Revas. The ship you find yourself on is the Dark Athena; a ship with a jaunty aquatic look to it. The stealth is a lot more fun here, Riddick felt quite powerless in Escape's stealth sections but here he feels dangerous, helped by his often corny and cheesy one liners. NPC's are a lot more interesting here, especially young girl Lynn who gives Riddick a slightly more human side as he attempts to help her without losing his one dimensional 'I'm so tough and cool' side (that grates a lot). Side missions this time come from finding a room full of prisoners that also give some decent back story to the crew as well as some fun nods to Escape. Some quite dark themes emerge here of rape as well as some quite strong language!

Riddick gets access to two hand blades which makes combat a lot easier and again there are some over powered mech sections. Escape had guns that were unusable due to DNA locking, here the majority of enemies are mindless cyborg drones; former prisoners twisted into unwilling slaves. They have guns grafted onto their bodies which means you can only use the gun by dragging the corpse around!

The 2nd half of Assault falls down a bit, it all looks nice and is a dramatic change of scene from the Dark Athena but all becomes slightly overlong and unexciting though you get hold of a cool air gun that is super powerful. As a side note in these games Riddick is such an unlikable, horrible anti hero that it is hard to care about him at all, he is a meathead idiot!

Escape is dated, Assault is mostly good and together they give you something that is fun, quite cheap now (my copy cost £5), it is interesting just feels quite out of date as there are so many better shooters on the market. Also; such long loading times!

Posted by Daniel Simmonds at 13:21