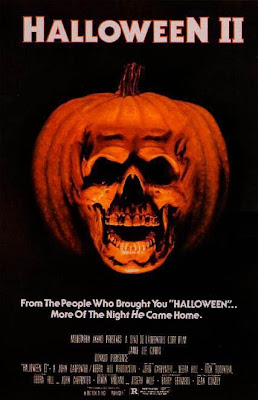 Watching Halloween for suitably enough Halloween my thirst for the series got ignited and I was forced to watch Halloween II. It is kinda essential viewing after watching the original as it is pretty much the second part of that film. Originally II was to be the last in the series.

Though filmed 3 years later Halloween II actually continues directly from the end of the first one, the very same night after Myers has vanished after being shot off a balcony by Dr Sam Loomis (Donald Pleasence) in fact. Finding Myers gone Loomis charges off into the night, raving about how he shot him 6 times and that he cannot be human. Meanwhile Laurie Strode (Jaime Lee Curtis) is taken to Haddonfield Hospital, upon learning this Myers heads there himself where he proceeds to slaughter the entire staff, somehow avoiding being seen the whole time. Just why he is after Strode in particular is finally revealed.

To be honest Halloween II is not as good as I remember it, it certainly has it's moments of genius. The body count is a lot higher, there is a ton more blood and gore and the special effects are better. Most the film is split between Loomis as usual charging around Haddonfield going to all the wrong places before finally realising where he actually should be, and Myers casually butchering everyone at the hospital. Pleasence is again fantastic, more manic than previous and really bringing life to his character. He really is the polar opposite of Myers.

Michael Myers is again an imposing figure (though the shortest he is ever portrayed), the emotionless mask bringing the chills, like a modern day terminator he is relentless, walking through plate glass windows, smashing down doors, even fire storms are not enough to stop his relentless pursuit of Strode. Too much time is spent on his killing random people, sure many different methods are used (top ones being syringe through the eyeball, submerging someone in boiling water until their face melts, and the good old fashioned knife stabs) but the amount of blood in effect gives these trashy over the top feels rather than the bloodless ones that came previously. Too many incidental characters are introduced and given decent screen time for no better reason than they are there to be killed. 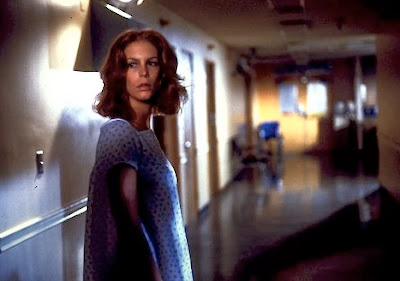 The plot is no more complex than before, though a strange sub plot concerning the occult was put in there to act as a red herring for Loomis to chase and was actually later revisited in subsequent films. Least the script was written once again by John Carpenter, though he no longer directed (well a few scenes he did). The final part of Halloween II is amazing and features a great chase sequence with a killer ending that is plain unforgettable. Plenty of POV shots from Michael again and some interesting directing such as him being shown from CCTV footage in the hospital, and him killing someone silently in the background while a foreground character obliviously talks away. A scene in which he hides in a room full of new born babies was quite unsettling.

Far too concerned with killing rather than creating great shots it feels worlds apart from the subtleness of Halloween yet shows Myers at his most relentless and unstoppable even if it does riff on the same ideas and use similar situations. The way he seems to teleport off screen from location to location felt a bit silly. Strode being virtually mute all film thanks to a bad reaction to drugs is interesting, and certainly saved on my hearing from her screaming half the first one. With a fantastic ending that is worth the price of admission alone, as well as Dr Sam Loomis, that catchy theme tune, and  the creepy mask Halloween II is worth a watch.

Posted by Daniel Simmonds at 13:56