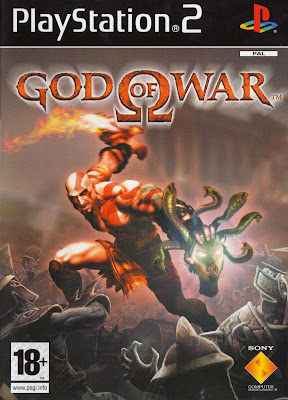 I have just beaten the third chronological game in the God of War series: God of War. Previously I played it on the PS2 but this time it was the HD re-release on the PS3 I did.

God of War is set 10 years after Kratos turned on his master; Ares the God of War. In that time he has been performing tasks for the Gods of Olympus in the hope his past sins will be forgiven and he can escape the endless nightmares he has been plagued with. Athena tells Kratos that Ares is laying siege to Athens and so he heads there. Unable to stop the invasion by Ares's forces he learns from an Oracle that a powerful weapon exists that has the power to kill a God. The weapon is Pandora's Box and is hidden away in a vast temple out in the middle of the desert of Lost Souls, so off he goes to find it. 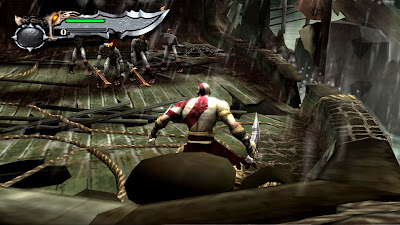 God of War is a 3rd person brawler with puzzle elements and is very well designed in places. Around half the game you battle around Athens, all fun enough but no moment really stood out, the true bones of the piece appear in the expertly designed temple of Pandora that rides upon the back of a Titan. The temple is around half the game and is just pure joy to travel through. A whole back story is given about the architect who designed the place, slowly going mad as the construction claimed the lives of his family one by one. It is so satisfying solving the many puzzles and the layout is pure genius. The Gods Hades, Poseidon, and Zeus each have their own giant sections. The basement area full of flames and spikes is the location for Hades section, the flooded tunnels for the God of the Sea, and the cliffs and spires for Zeus.

Combat is fun, Kratos has his chained blades that whirl around tackling many enemies at once, he also gets access to some giant swords and magical attacks that let him summon lightning bolts, summon dead souls to fight by his side, rain down lightening and using Medusa's head turn monsters to stone. As is always the case enemies drop red orbs that you can use to power up all your attacks, chests hidden around levels also give you these red orbs, as well as items that increase your magic and health. 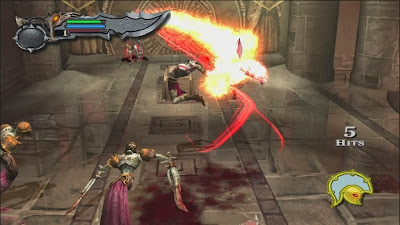 Enemies for the most part are fun to fight, the main fodder being skeletal warriors while plenty of Minotaur, Cyclops, snake women and flying creatures pop up. Most of these can be dispatched by QTE's for extra bonuses. Bosses are infrequent but fun for the most part. An initial sequence sees you fighting a Hydra, later on a challenging boss against a giant robotic creature is satisfying but the end boss is just a chore. The final bosses first two forms are fine, but the last in which you share an energy bar with the boss (each hit you do adds to your health and detracts from his and vice-versa) is very frustrating, after around 30 attempts I was forced to go down to Easy mode to beat him.

God of War is much more attractive than the bland Chains of Olympus, I never realised the quality of PSP games was so much lower than the PS2. The HD makes it all look good, though a level in which Ares stomps around in the background is terrible looking; Ares looks a mess of huge polygons, very ugly and off putting. The music works well, as usual for the series no single piece stands out. Some of the combat left me needing to pause the game to rest my aching hands, something I didn't get with Ascension. 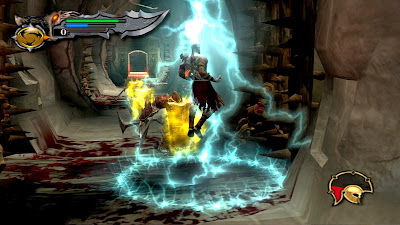 I loved the game, sure the end boss is atrociously unfair but for Pandora's Temple alone this is well worth playing, one of the best designed locations I can think of in a videogame in recent memory. A fun game with a good mix of combat and puzzles, I look forward to the rest.

Posted by Daniel Simmonds at 03:45