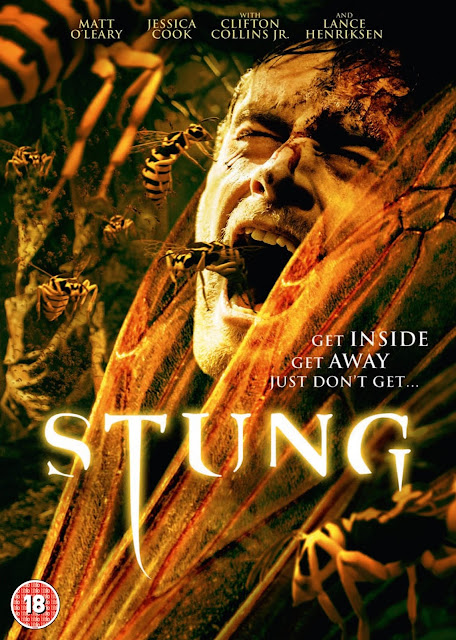 As is often my saying; another day another film up for nomination in the 2015 Fright Meter Awards. Stung is up for best special effects and is a creature feature film. I never like insects in films, they gross me out rather than make me fearful but here the insects are so large as to become un-gross.

Paul (Matt O'Leary) and Julia (Jessica Cook) are two caterers who have been hired to help out at the garden party of a rich lady at her remote countryside house. Things are going fine until later on in the evening when suddenly a swarm of giant wasps burst out a nest in the ground and start attacking the guests. The victims of the wasp stings immediately get turned into carriers of even larger wasps; ones that get to be as big as ponies, and rip out of the victims body. Soon Paul and Julia and a couple of other survivors (including Lance Henriksen as Mayor Caruthers) have barricaded themselves in the basement and must come up with a plan to escape the mutants. 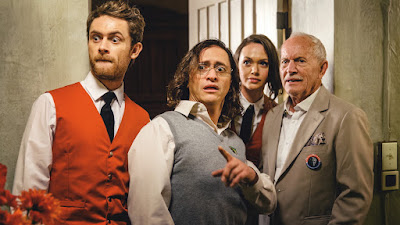 I figured I knew the genre well enough that I would be able to predict what would transpire in Stung and I was pretty much spot on. Things start off quiet enough with the start of the evening where we are introduced to the main characters. O'Leary is pretty great as Paul, he is really likable and a decent person, Cook's Jessica is nothing special though, a character type I have seen many times before. Of the other cast the majority are killed off pretty much right away, you have Henriksen who is a real pro and so gives a solid performance, the other character of note was Sydney; son of the rich woman (Clifton Collins Jr.), he does the trope of being infected but hiding it, he looks the part of the dodgy weirdo and was interesting.

Once the action starts up there is a combination of CGI and practical effects, for the most part the special effects are great, even the CGI is not bad at all though have seen better. The gigantic wasps burst out of their victims in gleeful detail, the first one we get to see crawls out a woman's mouth and ends up ripping her jaw off, then for the rest of the film whenever we see it the poor ladies head is still stuck on one of its legs. The same happens later on with a dog, while another victim has a wasp burst out his shoulder, he later turns up under the control of the shoulder mounted insect. The variety of wasps on offer here gave a slight Gremlins 2 vibe as most are distinctly different from each other, there is even a cow one complete with black and white skin and a bell that clanks along as it flies! 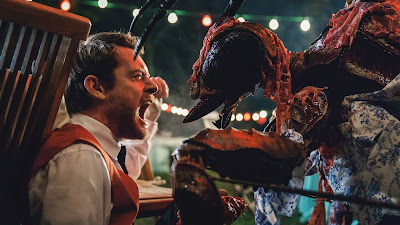 Being so large the ickiness of the creatures is gone but there is plenty of goo and slime that drips off of them, they are not too difficult to defeat but the size and strength of the creatures is formidable. Plot wise there is a knowingly lame reason for the horror (illegal plant fertiliser mutated them), and no real surprises for the action. I expected more characters to survive but the ones that did were who I expected, there is a cool finale that surprised me, and an either idiotic or inspired twist ending that had me shaking my head in bafflement.

If it wasn't for the performances of O'Leary and Henriksen Stung would have been a lot more worse off, as it was I did get a bit bored towards the end though appreciate the finale picked up the pace a bit. Also the lighting for the daylight scenes was really excellent, I don't know what they did to achieve it but looked great! The script also had some issues in that there is a lot of swearing, this is fine when done well but a lot of the cast, especially the older ones seemed uncomfortable swearing, their lines were delivered quite badly and stilted. 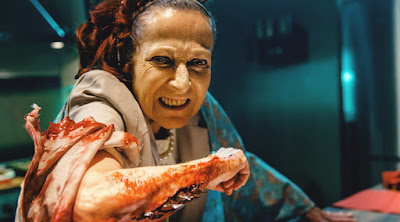 With some great special effects and a few decent actors I did find a lot of Stung enjoyable, however it is very predictable which led to boredom and as such I can't really say it is anything other than average.

Posted by Daniel Simmonds at 13:27