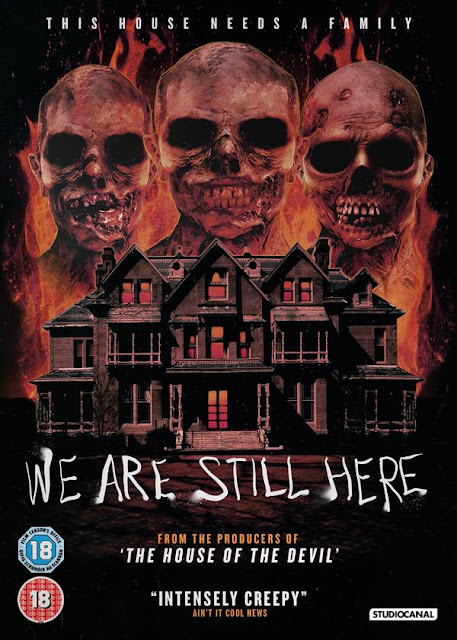 We Are Still Here is a horror film that is up for a variety of nominations for the 2015 Fright Meter Awards (yup, I'm still banging on about that). It is a ghost story with a slight twist to it that takes place in the 1970's.

Anne (Barbara Crampton) and Paul Sacchetti (Andrew Sensenig) are a grieving couple who recently lost their teenage son in a car accident and have moved out to the countryside to start a new life. Anne starts to witness unexplainable events in her new home and comes to believe their son Bobby's spirit is with them, and so invites her psychic hippy friend and her husband Jacob (Larry Fessenden) to come check out the property. However it soon becomes clear that an evil presence resides in the house, one that wants to kill all who enter... 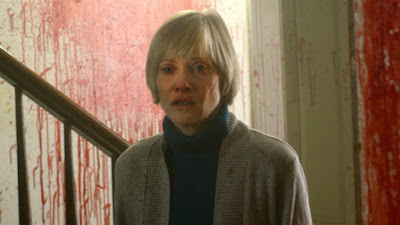 The 70's setting is well done and believable, it was refreshing to have a ghost story that isn't full of high tech gadgets, also to have one that doesn't eschew on gore. By the chaotic finale the walls are red with blood, there are some great special effects on show, perhaps my favourite being a bunch of knives to the neck, blood spurting out of the poor victims wound. At just 80 minutes long We Are Still Here goes along at a break neck pace, starting off with objects moving of their own accord it isn't too long before shadowy figures are seen and the death count begins to rise. Most films obviously have the structure of beginning, middle, and end but here it seems to cut out the middle. There is no meandering segment where typically the secrets of the house are slowly discovered, instead violence and horror is suddenly brought on, the events of characters forcing things to a crescendo.

With a sub plot involving the shady nearby townsfolk things eventually turn into a weird mash up of Straw Dogs and The Amityville Horror with elements of Silent Hill's over the top finale thrown in for good measure. I really enjoyed the manic elements that creep up so suddenly. One moment it is all typical spooky house feature, the next a demonic hand is bursting through someone's chest, right out of nowhere. The main evil in the house are these burnt up ghosts with milky white eyes, they look pretty good but seems the method of over laying CGI onto actors was used which never looks right with me. Also while there are moments of slight horror I never really ever felt too scared, I enjoyed it as a ghost film, and thought the directing by Ted Geoghegan was solid enough but isn't one that will keep you up at night. It's also a shame that the plot (also written by Geoghegan) blackens as much as it shines, there are some good beats but mostly it is too predictable, and some odd bits that are never explained (such as why the couple are not instantly killed by the evil of the house). 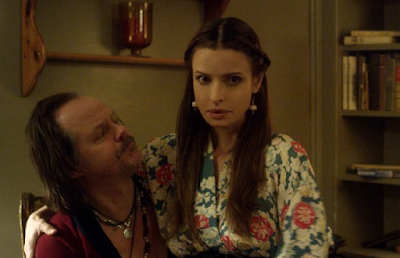 Acting, at least of the main cast is pretty strong though, Crampton as Anne, and Fessenden as the stoner hippy Larry in particular are highlights, their parts were written specifically with those people in mind and they play their roles perfectly, Fessenden bringing some under stated humour, while you feel Crampton is the grieving mother she is meant to be. Some of the acting isn't the best though, I found the character Dave to be a bit hammy and over the top rather than a realistic person, while much of the townsfolk are blank slates.

Despite the many faults I did actually think We Are Still Here was a decent film, the editing and directing were quite nostalgic, while the slight genre tweaks were enough to keep my attention engaged. Not the best plot in the world but with some great acting for the main cast this hits more than it misses.

Posted by Daniel Simmonds at 13:49