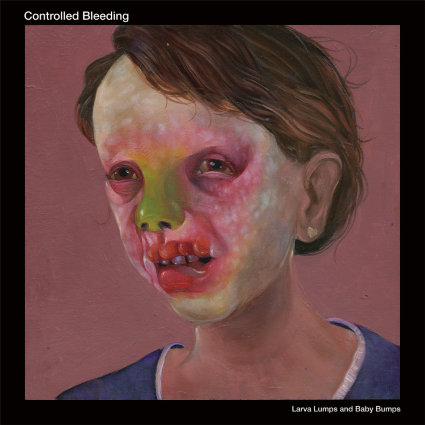 I don't really review music here at The Rotting Zombie, mainly because I know virtually zero about it and I find that music more than anything is extremely subjective. Larva Lumps and Baby Bumps is the latest album from Controlled Bleeding who formed in 1985 and over the years have dipped into many different genres, this is their first album since 2002.

I wouldn't say this music is horror focused at all really, I received an email from a PR guy with a link to the album and to my sheer embarrassment I promptly forgot about it until I received a follow up email a few weeks later. This review comes from my guilt at having forgot to reply to the initial message. Larva Lumps and Baby Bumps as the blurb describes it is 'an eclectic mix of industrial, progressive rock, jazz and heavy metal influences'. Over two sides there are 12 tracks, most of these are around 6 minutes in length though the side one finisher The Perks of Being a Perv is a meaty 22 minutes in length that was an experience to get though, at times it reminded me of a boss battle theme from the Silent Hill videogame.

A lot of the tracks in general have a rabid persistent loop to them, full of energy and repetition that at times brought to mind a huge factory from a hellscape. Chvad SB (whose album Crickets Were The Compass I reviewed a few years back) is a member of Controlled Bleeding and I could see some of the similarities. Where his album was more doom and gloom in feel, this high energy progressive jam that makes up a lot of the tracks had a similar spirit to it. You get bits of jazz such as in Carving Song that also has a sleazy industrial feel to it, elsewhere track Driving Through the Darkness is a prime example of the looping fast paced sound that is the signature style of Larva Lumps and Baby Bumps. Stand out track for me was Garage Dub, I can't really explain why, just my sole notes for that track were 'great'.

This album is certainly not for everyone, it is a sometimes challenging listen and on occasion the sheer amount of mechanical repetition threatened to drown me, but on the whole I didn't mind this at all, I ran to it, I cooked to it, and I simply sat and listened to it. Larva Lumps and Baby Bumps was released on a 2CD digipak and digital download on 26th August courtesy of Artoffact Records, a 2LP edition that is to be housed in a gatefold comes out September 23rd. Both the CD and LP come with an additional album of instrumental pieces the band recorded live with famed producer Martin Bisi (White Zombie, Sonic Youth). You can get the digital version here and the LP can be ordered here if you so wish.

Posted by Daniel Simmonds at 14:24