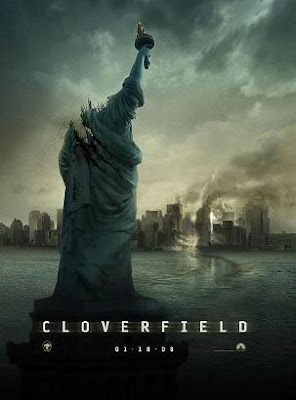 Cloverfield is amazing, and terrifying, and is a must see film. I never saw this when it was originally out. My sister did, but she made it sound so boring in her explanation of it that it totally put me off seeing it. While visiting her recently she convinced me to buy it.

This film is basically everything the awful Godzilla remake should have been. Godzilla managed to make the tale of a gigantic monster attacking New York really boring. The film was mediocre due to it being plain tedious. Cloverfield follows basically the same plot. A gigantic monster of unknown origins is attacking New York, rampaging through the streets destroying everything in its way. The plot follows a young group of party goers who are heading to the centre of the city to rescue one of the groups girlfriend who has gotten stuck there. 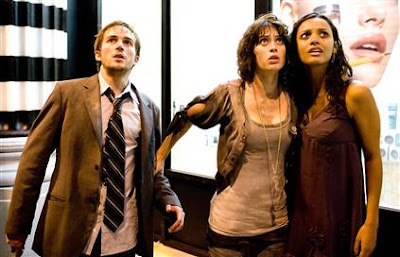 The film is shot totally by hand camera ala Blair Witch Project and Diary of the Dead style. The first 15 minutes of the film are quite boring, nothing much happens, but this just makes the monsters emergence all the more scary. The film is virtually shot in real time. Everything shown is what was recorded by the hand camera a man in the group is using. By staying with the small group for the duration of the film you come to really care about, and like them making any of their deaths all the more tragic. You really want them to survive. There is lots of confusion in the film, this creates fear as you are as much in the dark as the characters.

The film is shot really well. I was expecting amateur style filming due to the hand held style of the film, but it is really professionally done, and the special effects are frankly amazing. The giant monster is only glimpsed in patches, the skyscrapers of the city obscuring it, making the mind conjure up what isn't shown. As the film concerns the characters heading towards the centre of New York, the action ramps up as the film progresses in a natural way, and plot devices mean exciting scenes can plausibly be shot. 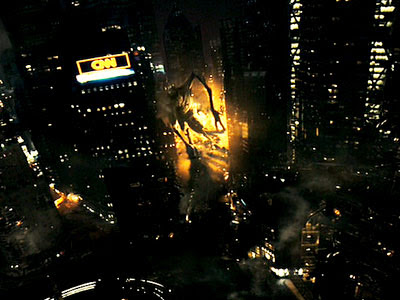 This is everything the dreadful Godzilla should have been, an instant classic which had me in literal tears by the end of it! I don't know what's wrong with me this year, but I'm finding everything super scary.

Posted by Daniel Simmonds at 07:25