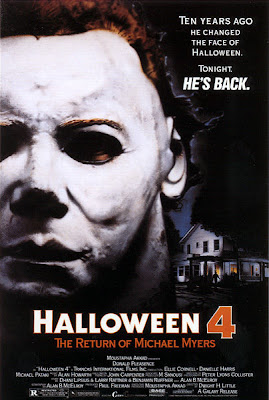 I've spoken previously about Halloween I, and II. I know their named with normal numbers rather than roman numerals, but the Halloween series is so great that it deserves the Romans. The Halloween films are just excellent. Other examples like Friday 13th were just plot less and pointless, but there has been a constant story ark through the Halloweens.

At the end of Halloween II Michael Myers night of terror was brought to an end when his (kinda useless) Dr; Sam Loomis blows himself and Myers up in the basement of Haddonfield General Hospital. Ten years have passed. Myers has been in a coma since that night, kept at a mental hospital. A badly scarred Loomis has kept watch over him, convinced that Myers is pure evil, and that there is nothing human left of him. The bureaucratic hospital manager secretly arranges for Myers to be transferred to a state prison, not informing Loomis who he sees as a kook. During transit one of the Ambulance staff casually mentions about Laurie Strodes daughter living in Haddonfield, this brings Myers out of his decade long coma and on a murderous path back to Haddonfield. 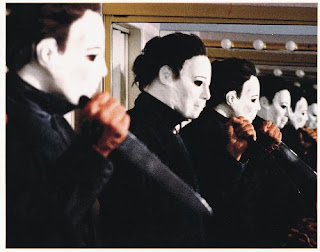 The body count is much higher than in the previous films this time around. Myers seems stronger now (in one scene he pins someone to a door by thrusting a shotgun right through them!) His bizarrely good driving skills are still in place, as is his ability to get around Haddonfield without drawing suspicion (at one point in broad daylight he manages to walk into a Halloween store and steal a mask without being seen. Keep in mind he's a giant, badly scarred man wearing bandages and a bloody boiler suit).

Dr Loomis is as useless and crazed as always. If anything he is even crazier than previous films, ranting and raving about the evil of Myers. But he is the only one who truly understands what Myers is capable of. In previous films Loomis would spend most the film in totally the wrong location before finally turning up where the action is at, and it's nice to see the same thing happens here, also he carries on the tradition of being knocked out by Myers. This time he is thrown through a plate glass window. Also in tradition is Myers death being ambiguous. It's always plausible that he could have survived. 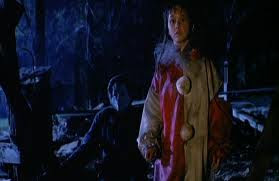 The plot is well done and has the best ending of any of the Halloween films, totally unexpected. There is a fantastic scene between Loomis and a priest where there are allusions to Loomis vs Myers being like Good vs Evil. Myers seems less scary though. He walks oddly, and his boiler suit is a bit baggy and his mask not as fearsome. The deaths are plenty, and violent, though quite a few occur off screen. There is nearly nudity, but nothing is shown (if that is your bag).

The 2nd best Halloween film, and fantastic sequel to a great franchise.

Posted by Daniel Simmonds at 02:52