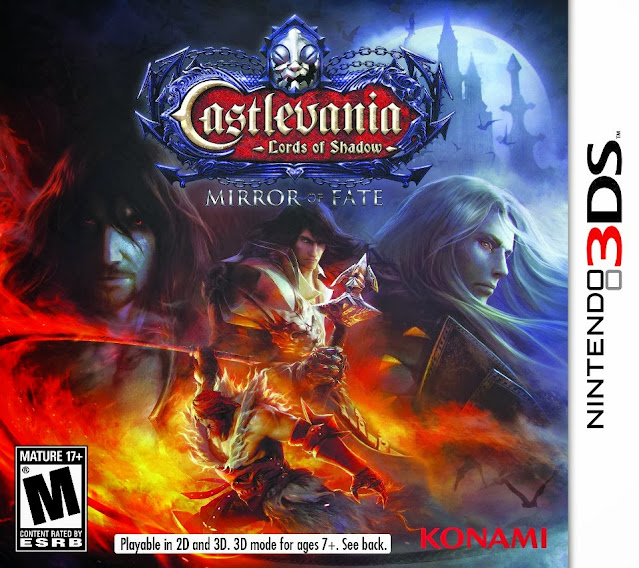 The game is split into four sections, each section with a different character and set in a different part of the timeline. The prologue sees you as Gabriel Belmont and is set before the events of the first game, on a quest to defeat a demon. The meat of the game is the remaining three characters. First you are Simon Belmont who has arrived at Dracula's castle to get revenge for the murder of his mother and father by the dark lord. The middle section has you playing as Alucard; half vampire who awakens in the castle with no memory of who he once was and sets out to confront Dracula, aiding Simon as he goes. The final section has you playing as Trevor Belmont (Simon's dad) who heads to the castle when Simon is a child. He hopes the powers of light and darkness will aid him in his mission to finally defeat Dracula. 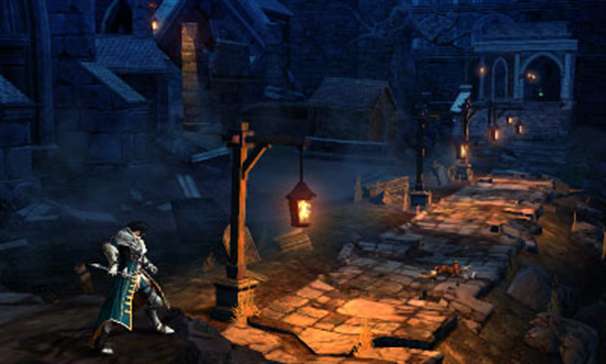 While the reboot of the Castlevania franchise reinvented it as a God of War style game, Mirror of Fates returns the series to its side scrolling 2D roots. It seems like the Metroidvania games of old; giant levels that let you backtrack to open new areas when you gain new abilities. It certainly looks great, the castle setting giving great depth to the 3D, yet Mirrors of Fate suffers a lot though unexciting level design.

You gain XP and level up yet this does not really benefit you much other than new moves. It is true you can backtrack to open new areas but these are universally boring, boring being something this game really excels at. The castle has many hidden items, or they would be hidden if a giant question mark didn't appear on the map to let you know where they are. Scrolls give you information in your bestiary. The bestiary is not very exciting as it is pretty much just descriptions of the attacks enemies do. Fallen soldiers of the order are all over the game, these have magical scrolls that give you insight into their last thoughts. Many of these are just used to give you hints on how to proceed, the ones which are not are just dull as dishwater to read for the most part. The final hidden items are chests that increase your ammo count, magic and health. Backtracking in previous games was fun, here it is just not interesting. 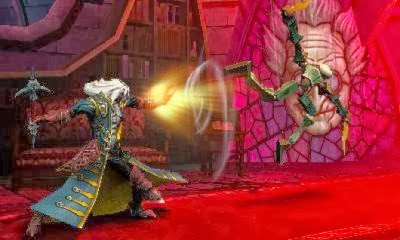 Fights against enemies are far more infrequent. The game only ever throws two or three monsters at you at once at best and all take a while to kill, usually you will get trapped in a room until the enemies are all dead. QTE events pop up in annoying places. The 3DS has stupidly mapped buttons and so I nearly always pressed the wrong command during the QTE events and had to retry sections initially exciting many times making them a chore. Bosses in theory are fun to fight but monster design is not particularly inspiring and they take too long to battle.

I love the Castlevania series yet Mirrors of Fate took me many months to complete as my boredom kept preventing me from playing. The plot should be interesting, it isn't. Cutscenes while pretty have nothing happen in them, knowing Dracula is the main character of Lords of Shadow 2 meant that I knew he would not be defeated here, so that felt off. The one good thing was the fact the game takes place at different times, though confusing that the last section takes place before the first two, I actually struggle to remember what happened at the end of the game chronologically. The music is not the greatness of old, but Lords of Shadow; all orchestral and epic and sounds great for a 3DS game, but not interesting either. 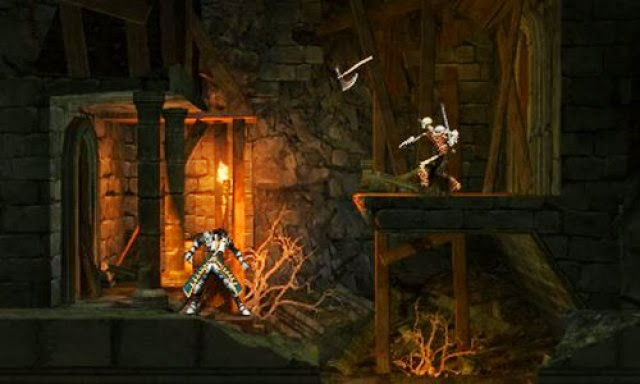 There is a lot of inventiveness to the game, so it is frustrating how bland it all feels, could have been so much better. Springing to mind; an ambush by possessed mannequins at a theatre, a descent through a clock tower as you attempt to outrun a falling giant bell, a running battle against a giant worm. All sound exciting on paper but in theory just feel off.

Castlevania: Mirrors of Fate should have been so much better, but this is just a poor copy of the Metroidvania format, everything is ticked off; monster types, locations, RPG elements, and iconic characters, but is all designed so work man like that it just seems to have no soul to it, in total despite it's attractive design of the castle location this is just distinctly average.

Posted by Daniel Simmonds at 10:47