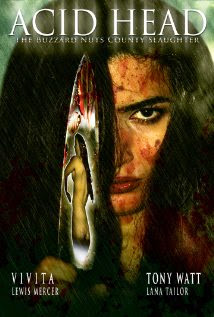 I first heard of Acid Head: The Buzzard Nuts County Slaughter a few years ago, then a month or so back I got access to an online screener to watch for review. Now this really is not a film for everyone, it's average user score on IMDB for instance is 3.9/10, so please bear that in mind (as of 2021 the film now has an even worse score of 1.4/10). At two and a half hours long this is a mission to get through, I myself watched it over about a period of three weeks, watching it in random chunks.

Acid Head is the name given to Pheromone Labonza (Vivita) a troubled acid scarred goth girl who a year previous went on a murderous rampage in Buzzard Nuts County before vanishing. Now she has decided to return to the county. This is very much a side plot though, the main story concerning Butch (Tony Watts who also wrote the story, and directed) whose life is at risk if he doesn't pay his loans back to a local mobster takes centre stage. There are many other story arcs with the one opening the movie being a bank robber whose escape has brought him also to Buzzard Nuts.

First mention has to go to the visual style used. The entire film seems to run at 10 frames a second, as a result nothing looks fluid, everything appears as a very fast moving collection of static images, hard to explain but this is constant throughout. Added to this is the extreme saturation that occurs, all the colours of the film are bleeding and bright bringing to mind old video footage from the 1970's, also cracks and splits pop on the screen to also create this impression. If you could convert LSD into a film then I am sure this is what that film would be as it creates a drugged up feeling just watching it. Cartoon style sound effects are used constantly, from the 'glug glug glugging' whenever someone drinks, to the monkey howling that occurs whenever a male character gets a glimpse of a scantily clad female, again this is consistent.

Now Acid Head features a heck of a lot of female nudity, and it is there for gratification as most the female characters are attractive and their nudity exists for no possible reason other than titillation. You get an extended scene of a pole dancer at a strip club, extended shower scenes, and even a ten minute interlude (complete with countdown timer) tastefully titled '10 Minute Beach Slut Intermission'. It would be easy to describe all these scenes as sexist, yet on the flip side male characters are universally shown to be sleazy, wretched people, in fact every single male is shown to be disgusting, or creepy, even the one handsome one is a contract killer. Females while usually with flesh on show come over far more strong willed and in command, with the males reduced to animals around them. The fact that the main killer is a female kind of points to this. Still nudity for nudity's sake is not for everyone and it does focus on these non event scenes for long lengths of time. The fact that the Acid Head killer storyline is a subplot was a bit strange what with her being the main cover image, I liked how it interweaved with the other story lines going on but it still felt a bit out of place even in this messed up twisted world. The frequent TV interviews spread over the film while vile and disgusting do create a slight commentary on media's obsession with violence. Special effects are purposely terrible with cartoon effects used to simulate gun fire and blood flying around in bright cartoon style all overlaid onto the manic scenes so that the sense of bizarreness is kept intact. I also must add how terrible the film ends, it is a shame after an utterly crazy 150 minutes it just appears to fizzle out, waiting that long for that payoff was unsatisfying even if some of the plot bleeds over into the end credits.

The acting is very patchy, apparently some of the actors were cast via YouTube videos they submitted, a lot of characters seem miscast, others seem perfectly cast, some can act, others not so much. This seems to be knowingly done as no effort is made to be serious, this can be seen via the use of comedy wigs that a lot of the characters wear, in no way realistic but add to the crazy charm. A lot of the music is well chosen and includes lots of classical music as well as original pieces that again adds to the cartoon vibe.

As I said at the start of this review Acid Head really is not for everyone, and to be honest I don't think I could have watched this all in one go. However as a piece of film to be dipped into every now and again it is perfect and strangely addictive. Vile, crude and often sleazy, full of drug, alcohol and sex references it nonetheless has a distinct style and sends you away to a unique place. The plot is bare bones and some of the characters borderline offensive but this just has something that set it apart from the pack for me, it just does not take itself seriously, now whether the director even cares what anyone watching thinks is another matter entirely.

Posted by Daniel Simmonds at 14:00