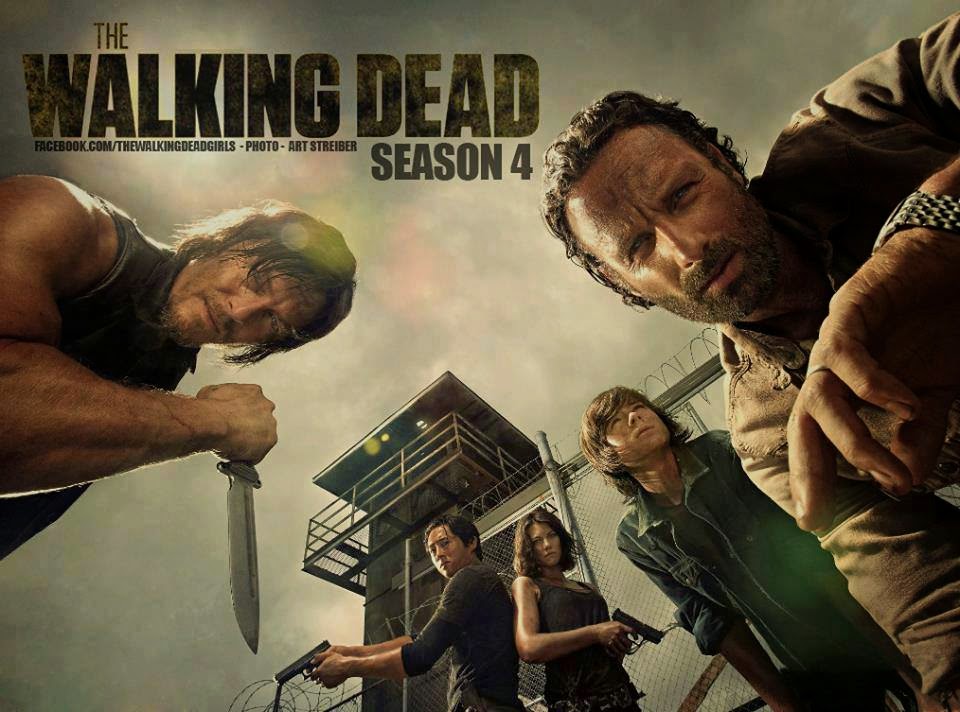 For some people The Walking Dead has got as stale as the undead corpses inhabiting that world. I just do not understand these people, especially as in my eyes season 4 was a strong one. My early concerns that the show had run out of ideas were utterly unfounded as time and time again ideas of a genius nature are featured. Now this is season 4 so there are going to be spoilers for previous seasons, you can read my reviews of those ones here, here, and here. I will try my best to keep spoilers for 4 to a minimum.

Having defeated the Governor and his cronies at the end of season 3 Rick Grimes (Andrew Lincoln) and his group at the prison have settled into a relatively peaceful existence, but this is ruined by the outbreak of a disease that spreads like wildfire infecting and killing many among the survivors. To make matters worse the dead come back to life as zombies and soon chaos reigns, especially with the reappearance of familiar faces. 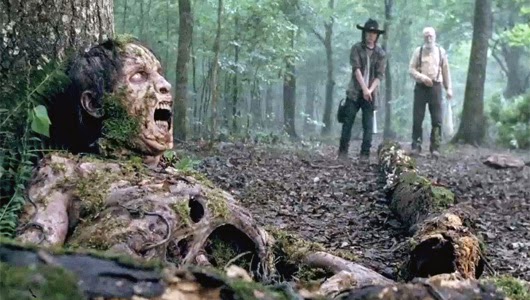 To say any more really would ruin this season as there is such a curve ball thrown halfway through that it would be too much of a spoiler to reveal. Basically The Walking Dead Season 4 feels like two different mini series, the mid season finale was really epic and in my opinion even outclassed the actual season finale. On the subject of season end I disagree that it was a poor one as I have read in some places, for me it was more that it ended on such a huge cliffhanger that the thought of having to wait until October to find out what happens next left me feeling distraught!

Season 3 experimented in the fantastic episode 'Clear' with the idea of having self contained episodes featuring just a few characters from the main cast, I am very pleased to see this carried on as season 4 has a lot of episodes that do this with a whole host of characters leading to some really exciting, as well as heartfelt and touching moments, and some that blew me away with just who was featured. 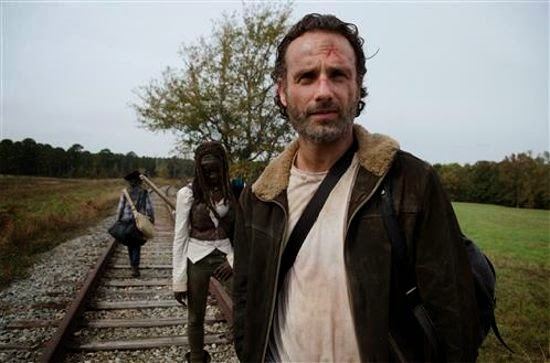 The zombies just keep on looking more and more horrific and twisted, the zombie make up is fantastic. There are burnt up ghouls, squashed, trapped, maimed and icky ones. There is just no shortage of the ways the undead are made to seem a real threat, whether it be coming under assault in thick mist, disease afflicted one, or even zombies literally raining down from the heavens. There is a lot of violence here with throats torn out and much more. The comics I eventually gave up on as the idea of making the zombies a back ground concern while a unique one did lead to boredom, the show realises this though so even during the most mellow episodes there is always at least one high action zombie sequence.

While I have been waxing lyrical this season is not without its faults. With the liberation of Woodbury a massive host of new people turned up in the show, it seems rather than make these into anything interesting they instead might as well all be wearing red shirts as anytime things go south you can guarantee that the ones getting killed will be people you don't recognise or care about. It is almost humorous how many of these background characters suffer horrific fates while the main cast are pretty much untouchable at times (though there are some big shocks). The same goes for any people discovered out in the wilds, they seem to exist only to get killed the second any of Ricks people discovers them. Attempts are made to flesh out some of the main characters, the ever excellent Michonne (Danai Gurira) now gets a back story that while interesting did seem to suddenly pop up out of nowhere. As a last gripe my suspension of disbelief was severely tested when Glenn appears to just teleport off screen, showing up somewhere he shouldn't be just for a story beat. 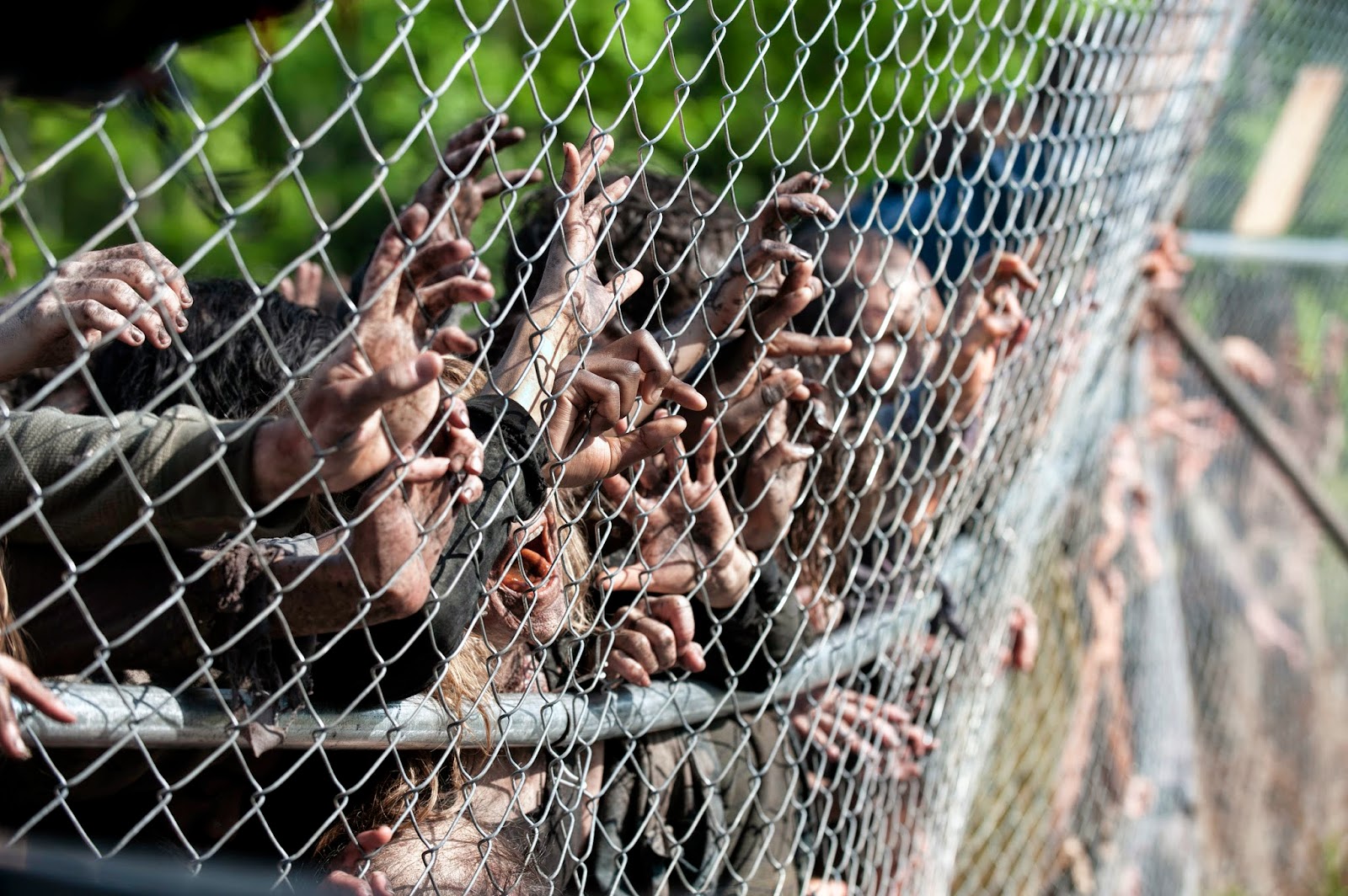 The acting is fantastic, the direction, effects, and even the choice of music is near perfect, this may well be the best series yet and I highly recommend watching it. This season goes to some extremely dark places, but it also finds time to have more light hearted times, it is a strong balance that works well.

Posted by Daniel Simmonds at 06:47