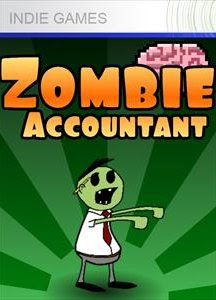 Zombie Accountant is yet another X-Box Indie game, there is never a shortage of these Indie games to review it is just that I don't want to just review video games, I want to review everything horror and zombie based.

Zombie Accountant sees you as an employee at a Office who just so happens to be a zombie.  You must run through the Office collecting tax returns while avoiding running into filing cabinets and avoid eating your co-workers.  Being a zombie it is natural to want to eat brains so when you pass humans you must duck your head to avoid the urge.  As you collect more and more tax returns you get promoted up through the ranks. 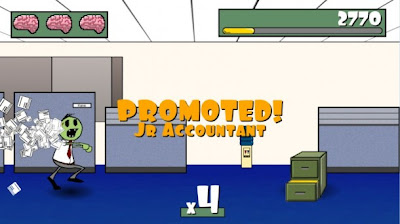 The game is one never ending level which sees your zombie constantly running.  Collecting tax returns without hitting any obstacles leads to your score multiplier increasing but also leads to your zombie running quicker and quicker.  On the brains front if you eat more than 3 workers brains it is game over, a screen shows your notice of termination with the reason being 'eating brains after being specifically asked to stop'.  With only two buttons; duck and jump it may sound easy but this is twitch game play at its finest!

The game features large characters in a bright colourful environment with an awesome chip-tune soundtrack.  At 80 Microsoft points the game is as cheap as possible so definitely recommended!

Posted by Daniel Simmonds at 09:44