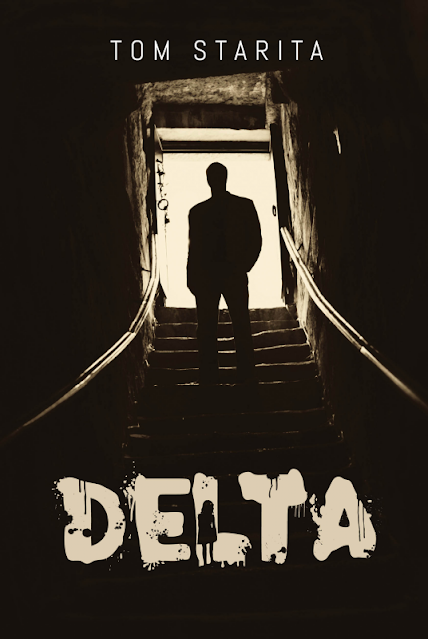 Delta is the latest novel from author Tom Starita (Growth & Change Are Highly Overrated, Two Ways to Sunday) and covers horror in a more subtle way by having a supernatural aspect be mostly understated, possibly simmering away in the background. The novel is split into four distinct parts, each part having the focus on a different character. This was a nice surprise to find, as my initial thoughts during part one were a yearning for more characters, and that is what was provided.
Jason is a twenty six year old man who hides within the basement of his house a terrible secret. The man has had a hard life, his beloved wife Beth died some years back, and then a few months ago a incident at a river claimed the lives of not only his father, but also of his young daughter, Delta. The thing is, despite allegedly drowning, his daughter now resides locked in the basement, though is somehow changed. For fear of what might happen if her miraculous, unexplainable reappearance was discovered, and for fear of some unseen menace searching for the girl, he keeps her locked up against her protestations. With the disappearance of a girl of a similar description in the local area, and with Jason's mental state not being the sturdiest, are things exactly as they appear for him?
I have to say that despite the good writing it did take me awhile to get into Delta. If the whole novel had been based around Jason then I don't think I would have enjoyed it as much as I did. I still have not read enough horrors to know for sure (for some reason it was only this past decade I really began to read the genre), but it did feel somewhat fresh to have an African American man as the protagonist. My complaints really were with following this man around who to all intents and purposes appears to have kidnapped a child. His mantra of "I'm a good man" whenever he visits Delta did nothing to endear me to him. That made the transition at the beginning of part two into the past all the more welcoming. Looking back, I was surprised to see part one covered the first eighty four pages, it really didn't feel like it was that long, but regardless, I became increasingly hooked from part two. This was a snowballing effect as by the time the end was in sight, Delta was all I could think about, I was desperate to get back to my lunch break each time so that I could continue the story (as always I only tend to read during my day job lunch breaks).
I may not have fully appreciated that first part, yet it was essential for what follows. The horror intensifies as we are then shown what occurred with Beth in the past. Knowing that in the present she is no longer alive, it made this all the more intriguing, knowing that we would be shown her fate and how it has come to affect Jason's future. It all involves a more real and physical horror than the supernatural suggestions hinted at in the writing. There are peppered throughout Delta some nasty moments that characters go through, some which are critical to the story. I would say with Beth's story there are parts that felt a little glossed over, a key decision she makes in particular doesn't really get much page time, I was left wondering how she could decide to do what she did, considering the circumstances of what led to her having to make that decision. Obviously here, I'm remaining purposefully vague, I went in not having any knowledge of what occurs, the best way to experience this. Further parts unite to create an overarching story that had a fair few twists in it, some of which slowly dawned on me. Jason may not have much interaction with others, but his sister-in-law Collette does. The struggles with her overbearing and controlling mother, her interactions with her hen-pecked father, and the rekindling of a friendship with a man who has now become the local sheriff all flesh out the small town world the story occurs in.
The horror elements are never too far away, often they are more open to interpretation than implicitly stated, though I got a good feel for the direction the author was pointing readers towards, despite some red herrings. It culminates in a satisfying conclusion (with some wonderfully vivid descriptions) where the worlds of crime and horror merge into one delicious whole. I will add the conclusion (that is part four of the novel) did shed some light on characters, but it also appeared to be setting up a sequel, with the story very much still in transit. Sure, it was frustrating for the story not to be finished, but I would also add it was also a bit exciting knowing that there may be further stories in the world of Delta to be told.
Despite it taking a third of the novel to pass before it really got its hooks into me, in hindsight I appreciated how part one sets things up. I find it hard to criticise any novel which becomes hard to put down, and with Delta it achieved that. From a simple story of kidnapping, this becomes something greater than it first appears, something that transitioned into a real page turner.
SCORE:

Posted by Daniel Simmonds at 12:42