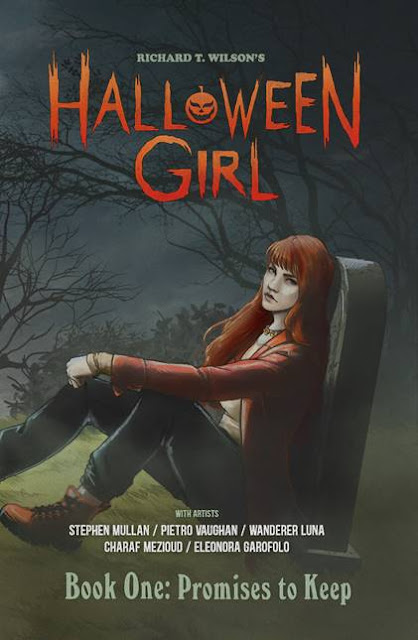 It was back in May of this year when I first heard of Richard T. Wilson's Halloween Girl. Now, just in time for Halloween, comes Halloween Girl - Book One: Promises to Keep, which brings together the first seven issues combined into a 170 page graphic novel. I already covered my thoughts on the first three issues previously so I will try and talk more about the graphic novel as a whole.

Eighteen year old ghost Charlotte is the protagonist of the series. Despite being dead she discovers she has powers that let her combat supernatural evil in the world. Her son Luke has been kidnapped by a shady secret society known as The Hollow, and so Charlotte finds herself forced into going up against them. On her side is the enigmatic Poe, together they take on a terrible power that might have made a deal with the devil himself... 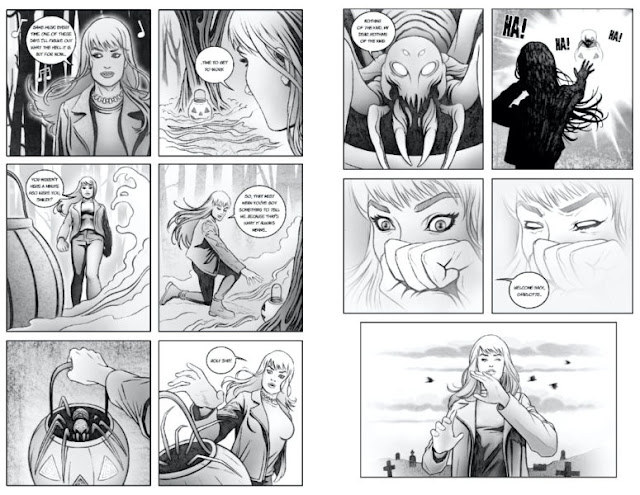 Despite being a unified story there were five different artists used over the run. Mostly the art is similar in style, with the exception of Pietro Vaughan whose stark black and white really stood out for his entry in Chapter 3: The Forgotten Boy. Almost my favourite art in the whole book, though I really loved the messy shading style Eleonora Garofolo used in the final two chapters. That one featured so much detail, and the shading was just perfect.

With the overarching story being Charlotte's quest to rescue her kidnapped son I figured this would be something that was never resolved. Without going into details, it was cool to see that Book One does concludes somewhat neatly, with it feeling like one type of threat is over at the very least. Things barrel along at such a pace that a few characters in particular really went through some unexpected changes. The first two chapters made this seem like it would be a 'villain of the week' type thing going on, but those were perhaps the most action packed parts to be found, the collection as a whole felt geared around a particular 'big bad' so I can see any future story going towards a different antagonist. Throughout there is plenty of dialogue which really helped to shape the world of Halloween Girl. I guess any complaints would be that there isn't a huge cast of characters, with good and bad sides only featuring a handful of characters. There was a fun late addition to the heroes side in the form of a human sensitive to the spirit world, and there was a hint of a more intimidating foe than The Hollow themselves.

I enjoyed my time with Halloween Girl, I found the black and white artstyle to be on the whole engaging, creating characters with expressive facial details. It was a good choice to feature different artists, was interesting seeing their own particular takes on how to bring detail to the world. I also liked how self contained the story became, with this feeling like it could just as much be the end to the story, as well as leaving things open for possible future outings. Halloween Girl - Book One: Promises to Keep is out now and can be ordered from comic shops and bookstores.

Posted by Daniel Simmonds at 10:20