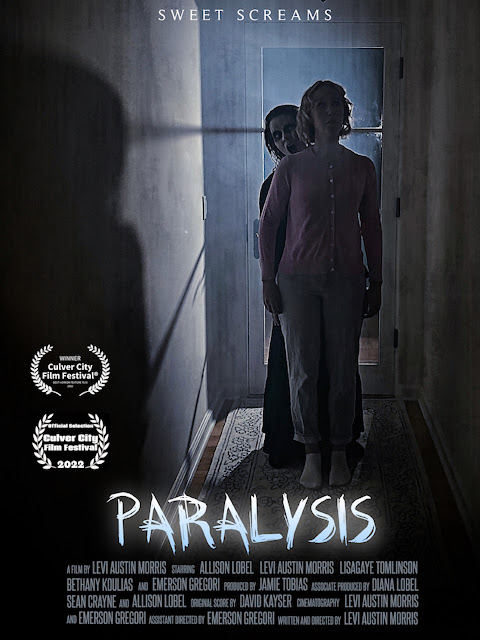 Paralysis is a supernatural horror that was written and directed by Levi Austin Morris, who also played a significant side character in this. Sleep paralysis plays a role in the film, and I haven't had a fun experience with those in the past, supernatural sleep paralysis horrors such as Conjuring: The Beyond and Dead Awake failing to leave much of an impression. Thankfully, while this idea is featured, it isn't a key cornerstone of this slow burn horror, with the title working more as a double meaning.

Haley Stone (Allison Lobel - Obscura) has fallen into a reclusive lifestyle after a recent death in the family. She ignores phone calls from family and friends, has recurring vivid nightmares, and has stopped taking her (possibly antipsychotic) medication. Recently her nightmares and hallucinations have gotten worse, and her brother, Nicky (Levi Austin Morris), who lives with Haley, hasn't helped due to him frequently vanishing for hours at a time with no warning. In desperation, she contacts a paranormal expert, Anissa (Lisagaye Tomlinson), as she fears that what she is dealing with is of a supernatural origin.

There's a mild twist around a third into Paralysis which is an essential part of the story. While I won't spoil that here, I also thought it was very obvious, so I'm not entirely convinced it wasn't meant to be really obvious to the viewer from the start. Being an indie film there are minimal actors here, a cast of eleven, though those who actually appear on screen would bring that down to around six or seven. This means a lot of the movie has Haley on her own, with it not really clear to begin with if her troubles are down to her mental health problems, or if something more sinister is going on. Her brother Nicky is perhaps the second most featured character, but there is no deep look into what sort of a person he is, he certainly gets important scenes that give him more depth, but often when he appeared he always felt like he had his own private problems going on that were occurring outside of his scenes.
One of the more key side characters is Anissa, she has a late appearance in the film, but stays around, working as a guide for discovering what is really going on in the house. I thought she was the most interesting character, if only due to the fact that Haley is such a mess the whole movie that her perspective felt unreliable, and so was good to get a different one.

The horror comes from the hallucinations or sightings Haley keeps having. While sleeping she has visions of a ghost of an old woman (Bethany Koulias - Obscura), who physically attacks her, and later a more demonic looking man (Emerson Gregori) who wears a cool looking mask. The horror is slight, often relegated to doors opening and closing on their own, and the ghostly figures wearing white contact lenses (simple yet effective) standing around. The story is more psychological, with a contrast between the haunting Haley is suffering and her own personal demons, which have put her in such a bad place of unending grief. As a character says in the film (to paraphrase) 'grief is temporary, love is eternal'. On the subject of the horror, the best thing that Paralysis does is its dream sequences. Frequently you see scenes only to discover they were all taking place within Haley's head, and sometimes you get almost arthouse-lite nightmare sequences with recurring imagery.
Impressively, the film was shot using an iPhone, something I would have never guessed due to the quality of the directing and cinematography in general.

Paralysis will not be for everyone, especially those expecting a film that aims to be scary. This was never especially so, and nor did it really stand apart, the idea of an isolated person being haunted has been done countless times. This more uses the idea of the supernatural as a way to explore the grieving process, that is presented well here, helped by the mournful soundtrack. A little slow paced at times, but nonetheless, this was a solid indie horror. For more details you can check out the IMDB page, or Paralysis' Facebook and Instagram pages.

Posted by Daniel Simmonds at 13:55