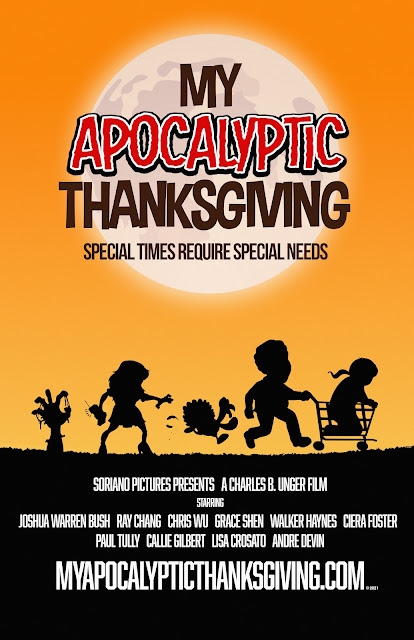 My Apocalyptic Thanksgiving is at its heart a drama about the importance of family. There is one element that made this a good fit for my blog, and that is zombies. With the special needs protagonist obsessed with the undead, and in particular a show about them, around a fifth of the film's runtime uses scenes from the fictional show, to contrast what is happening there to what is happening to the main lead. This was directed by Charles B. Unger, with writing by Richard Soriano. Soriano says of the film "This film is a love letter to the special needs adults that have become my family as well as the caregivers and their families and the adults without loved ones in their lives."

Joshua Warren Bush stars as Marcus, a special needs adult in his early twenties. With the characters in his favourite zombie show placing a lot of importance on family, the man decides he wants to find his mother, someone who he hasn't seen since he was a child. Eventually she is located, with Marcus needing to get some money to be able to afford the trip to see her. He gets a job at a nearby laundromat and soon befriends the owner, Jung (Ray Chang - Lethal Weapon 4), his wife Me Young (Grace Shen - Grey's Anatomy TV series) and their son Kim (Chris Wu). However, after a criminal sees the potential in Marcus due to his size and gullibility, the man falls in with the wrong crowd, and soon he must make a choice as to where his loyalties lie.

Obviously for me the best part about the movie were the scenes set within the fictional zombie show. These sequences were always fun to watch, the show is given more of a muted drab look than the real world, and features lots of scenes of characters battling the undead. The undead looked great here, and while this only made up a small portion of the overall run time, it was fun to keep re-visiting and see the progression of the character's plot. This feeds back into the main story due to the themes of family that are present within the show. Special effects are kept to a minimum but they were enjoyable, a zombie with its face on fire in a blatant use of CG for example, was still entertaining to watch.
The main film felt a little convoluted at times, perhaps one less subplot would have smoothed things out as there seemed to be a lot going on at times. Marcus wanting to meet his mother may have been the driving force for his actions, but this scene when it happens became almost farcical due to the extreme nature of the character he meets.

I had expected more of an upbeat story within My Apocalyptic Thanksgiving but was surprised by just how bleak and serious it got at times. Marcus as a character has a real downward trajectory, the catalyst being a resident at his home dying at the movie's start. He is someone who doesn't seem fully to understand right from wrong at times, and is he is a gullible character. In no way perfect he is prone to violent outbursts when under stress, and at other points has vivid hallucinations about the undead. This downward spiral goes all the way to near the end of the film, with the final ten minutes used to pull everything around for him. Ultimately there are no real ramifications for his actions, however innocently he fell into them, though he does learn a lesson about family.
There were quite a lot of characters, the most interesting ones being Jung and his family. They have their own subplot going about the importance of family, I liked these characters and they gave some nice drama with their interactions. I also liked the character of Frank (Walker Haynes - The Haunting at Woodland Hills), I was never sure as to the character's real motivations and so he was an interesting person to follow.

My Apocalyptic Thanksgiving may feel slightly overlong, but the core story about the importance of family is well realised on screen. With many of the cast and crew having friends and family members with special needs, this came from a place of love and I did like the many scenes from the show within the film. This released on VOD platforms across North America on November 22nd from Freestyle Digital Media.

Posted by Daniel Simmonds at 11:32