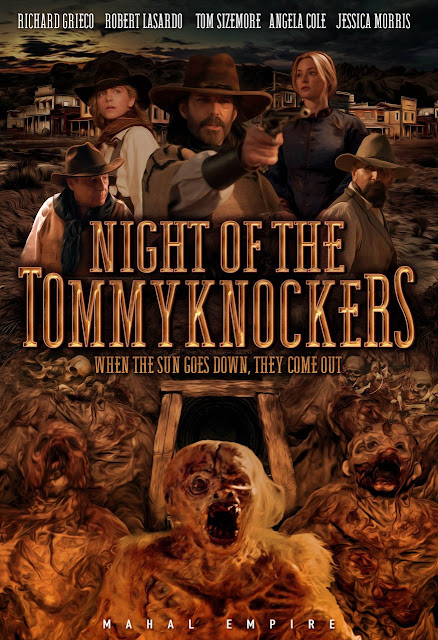 It was only last month that I reviewed Michael Su's Bridge of the Doomed and now I find myself watching another of his new horrors. Before it was zombies, this time it is a creature feature, one which has been combined with a western. For whatever reason people seem to struggle to mix horrors and westerns together, at the very least I hadn't seen a decent one, everything from the Kurt Russell led Bone Tomahawk to indie films like The Legend of Hawes failed to leave much of an impression. Night of the Tommyknockers may be full of cliches, but that is what works in its favour, as it ticks all the right boxes to feel suitably western, while has some great creature design.

In the 1870's, some miners digging for gold accidentally release some lethal creatures which had existed living beneath the ground for countless years. Meanwhile, Dirk (Richard Grieco - Attack of the Unknown) and his gang of bandits are looking for a new town to rob, having just pulled off a successful bank robbery. Dirk's girlfriend, and fellow gang member, Betsy (Angela Cole) suggests a particular town to head to where she believes the bank is storing gold. They arrive to find the place seemingly deserted, and they soon find out the reason for this, the place had been under constant attack from creatures freed from the nearby mine. With no other choice but to team up with the survivors hiding out in the saloon, they must all work together to try and fend off the creatures until dawn comes.

Night of the Tommyknockers was shot two years after Bridge of the Doomed and used much of the same team who made that one. With that film it sometimes felt like it wasn't able to make the idea of it's main plot, that of  protecting an essential bridge, seem that believable, due to the bridge not seeming that essential. With this film, from the very start it felt like a western. The music was spot on, the locations were perfect, and the huge cast of characters felt like they fitted in to the time period. By the time the intro credits rolled, with lovely sepia tinged images I was fully into the time period, and there was never a moment where it felt like this was a film attempting to create the feel. As stereotypical as some characters and moments were, this felt like a western through and through, with the horror a nicely blended element.

I guess you could say the film took a while to get to the actual horror part. Aside from the prologue, the creatures don't really make an appearance until nearly forty minutes in. There seemed to be a giant cast of characters here and rather than cause confusion by having too many, I really enjoyed how many there were. Dirk and his group are set up to be the anti-hero protagonists, and at least for the first half they are, but by the second half, when a whole bunch of new characters are introduced their roles get diluted. I didn't really mind as some of the gang were not nice people, but they had some of the best characters. Grieco came across as a Clint Eastwood type of character, a man of few words, and Robert LaSardo (Bridge of the Doomed, Death Count) had a memorable and enjoyable role as Lucky. I thought Betsy also became an interesting character, the catalyst for some fun moments towards the end of the movie.

The introduction of the creatures moved the film more into horror territory, and follows a typically siege type story, of having to hold out till dawn (From Dusk Till Dawn shared similar story elements), a horror film trope that I wouldn't say has been overused, purely because it is a plot concept that works well. I most recently saw the same idea used just last month with Hellblazers.
The design of the creatures was especially impressive, the look kind of reminded me of a skinny moth-eaten Yeti, that description isn't really doing them justice. I also liked how many of them there were, it always seems unbelievable when there are only a handful of creatures, but here there were loads, leading to quite a few fun action scenes of various characters battling them.
With plenty of enemies to face there were plenty of death sequences, some better than others, as I recall one of the more notable characters appeared to just be dragged off camera never to be seen again, an underwhelming end I thought. Outside of gun shots the special effects were kept to a minimum, but they always looked great, some nice wounds on characters attacked by the creatures claws, and an always appreciated moment of a character seeming to get their insides pulled out!

Of course I love horror, and while not in my top genres for films, I do enjoy a good western. Night of the Tommyknockers effectively melded the two together, I loved the music as cliche as it was, and I liked the performances of the actors portraying people from the era. With great creature design, and no end of action, this was a film that never lost its momentum from beginning to end. Night of the Tommyknockers releases on November 25th from Gravitas Ventures.

Posted by Daniel Simmonds at 04:47