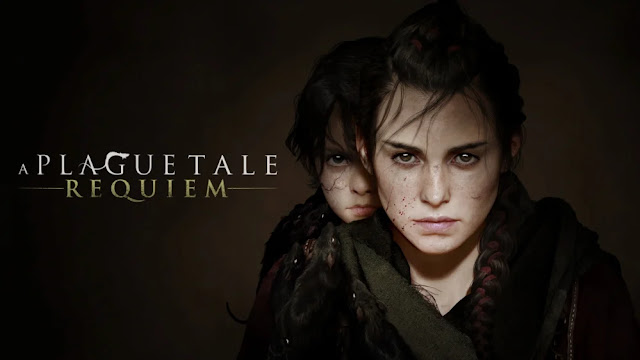 I found 2019's A Plague Tale: Innocence to be a surprise hit with me. I loved the setting of 1300s France, and loved the concept of having to survive a plague of supernatural rats. It was obvious that game was inspired in parts by The Last of Us and so it maybe shouldn't be a surprise that this sequel, A Plague Tale: Requiem has been inspired by elements of The Last of Us: Part II. This is mainly in terms of the game trying to be as bleak and miserable as humanly possible.

The story picks up around six months after the end of Innocence, with Amicia (voiced by Charlotte McBurney in the English language version), her mother, best friend Lucas (Kit Connor), and her young brother Hugo (Logan Hannan) having travelled to the south of France. While Hugo is still afflicted with the strange supernatural curse that causes killer rats to follow him wherever he goes, this unnatural ability has been dormant, and it is hoped that the terror of the curse is far in the past. After a chance violent encounter, Hugo's powers come back, even more deadly than before. His mother had gotten in contact with an ancient secret organisation known as The Order, with the hope that the help their specialist knowledge can bring will be able to provide a cure. Hugo however has different plans, he keeps having a recurring dream about a mysterious island protected by a phoenix, and becomes convinced that this place is the answer to a cure. With Amicia's help, the two set off on their own in search of this mysterious place. 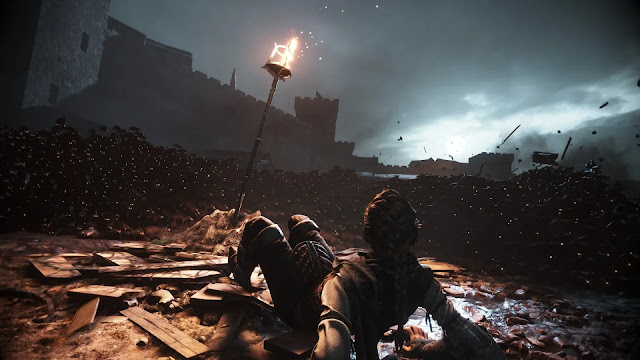 Rather than try to dramatically change up the feel, Requiem felt a lot like more of the same. The game is spit into about sixteen chapters, and is split between combat free story sections, such as when Amicia and Hugo are visiting towns and settlements, combat sections when stealth must be used to either bypass or kill human enemies, puzzle sections involving traversing literal seas of killer rats, and a mix of human enemies and the rats. For the combat you eventually gain access to all the tools of the first game, with Amicia mainly using her sling to kill guards, set flammable objects on fire, and extinguish flames. With more combat this time around she also gets a nifty crossbow, though ammo for that is scarce. There is a slight puzzle element with the combat as many enemies wear helmets, requiring you to use environmental objects to aid your fighting, such as pots of oil, and sacks of flour. Hugo also gets some abilities this time around, my favourite being him able to control rats, which you can then use to hunt down enemies. Like before, combat can be frustrating, and with a handful of wave based survival moments forced on you, I often found myself swearing a lot.
Mixed in with the stealth, puzzles and combat are thrilling moments that typically have you running away as thousands of rats swarm towards you like a wave. No matter how many of these occurred (felt it was about once an hour over the ten to fifteen hour game), these always thrilled, and rarely caused frustration.

I expected the adventure would take me to a large number of new locations, but I found that around half the game takes place in a single place. This place had almost a Tomb Raider feel, thanks to a small semi-open world area from which you keep going off to conquer different dungeons (for want of a better word). I did enjoy this area, and I liked the introduction of a cultish antagonistic force that brought with them a slight Wicker Man feel to the game. It leads to some stunning world design, a favourite was a humongous underground temple, and a visit to a vast shrine that detailed the previous time someone was afflicted with the rat curse. I found the game world to be beautiful throughout, with the horror melding really well with the intensity of the new rat curse. There was only one part I really disliked, and was for ridiculous reasons. There is a chapter that takes place on a boat, with you being instructed to do various things to help with it sailing. The problem was that you are told to go to particular parts of the boat and do stuff, but there was no prompt where exactly to go. A section that I should have been able to breeze through in a few minutes actually took me close to twenty minutes of sheer frustration as I painstakingly explored every single pixel of the boat trying to find the button prompt that would allow me to proceed! 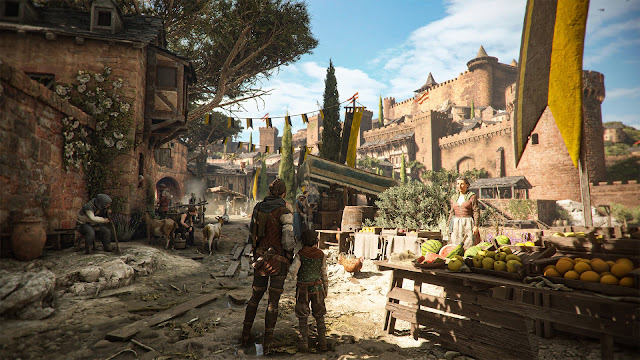 The story was interesting, but more so in how it all seemed to be a bit of a wild goose chase. Amicia and Hugo become convinced the answer to the curse is to investigate what happened the previous time someone was afflicted with it. This led to the adventure taking on a random feel with Amicia projecting what she believed happened the last time around. Sure, it turns out her musings were correct, but in the moment it seemed like she was really grasping at straws. From the very beginning I couldn't help but be irritated at the characters, I kept thinking 'just kill Hugo and all your problems will be over'. He is afterall a character who has unwittingly killed thousands upon thousands of the people over the course of the two games! I did really like the deep look into Amicia's very fragile state. After all the killing of Innocence she is full of PTSD, Requiem takes her to the brink of insanity, with her violent way of thinking negatively impacting those around her, in a way that really reminded me of Ellie's actions in The Last of Us: Part II. This bleakness got more and more intense as the game progressed, with the initial optimism leading to rage, and a darker and darker tale that I just couldn't see finishing on a happy note. I do like bleakness, but it made for a game that was sometimes tough to get enjoyment out of playing.

A Plague Tale: Requiem is more of the same. Whether that is a good or bad thing is up to you. I found it suffered a lot of the same faults in terms of how frustrating it could be, but was still a joy to explore such wonderful looking environments. The characters were well realised, especially with Amicia and Hugo, they go through a lot. With a story that never really satisfied, and the game's pace slowing down towards the end, I was happy when the end credits rolled. Still, I did feel this was worth the time it took to beat, it can be tough in places, but was still a decent enough game.

Posted by Daniel Simmonds at 10:02